The Greatest Games of All Time: Phantasy Star II

We induct this classic Sega Genesis role-playing game into our list of greatest games of all time.

One of the most famous moments in all of role-playing games is surely the death of Aeris in Final Fantasy VII. But what many RPG fans may not realize is that, years before Final Fantasy VII introduced role-playing to a new generation of fans, Phantasy Star II executed a similarly shocking plot twist, along with an even more shocking ending. Nei, your trusted companion throughout the early part of the adventure, is killed in a showdown with a villainous character who's effectively her mother. Having learned that she is a clone, and not so different from the monsters infesting her world, Nei seems to lose the will to live and recklessly attacks her powerful adversary, suffering an inevitable and final defeat. Nei's death comes as a huge and upsetting surprise, though it galvanizes Rolf and his remaining companions to press on lest her sacrifice be in vain.

As if that weren't enough, Phantasy Star II ends with a real bang: The culprits behind all of your troubles turn out to be none other than the remnants of planet Earth, who, having flushed their planet of all its natural resources, now have their sights set on your solar system. The game's unforgettable ending leaves room for interpretation, but implies that Rolf and all his comrades make their last stand fighting the evil forces of Earth. It's an incredible payoff for a lengthy adventure.

Proclaimed as the first-ever 6-megabit game cartridge, Phantasy Star II had "epic" written all over it. This Sega Genesis classic retailed for a steep $69, but most anyone who had the chance to play it at the time would tell you it was worth every penny. Featuring an unforgettable plot and a great ensemble cast, Phantasy Star II was heralded as the greatest console role-playing game to date, and it continues to be the blueprint for a style of gaming that remains popular to this day.

Phantasy Star II's predecessor was one of the greatest Sega Master System games, so therefore many players had very high hopes going into the sequel. They were thrilled to find that Phantasy Star II was superior to the first game in almost every respect. A more ambitious, more dramatic storyline and a lengthier quest made Phantasy Star II much more memorable and longer lasting than any other video game of its time. The story gingerly broached serious subject matter--the sacrifice and death of close friends, the imminent threat of global destruction, and the danger of a society overly reliant upon technology are just some of the themes that Phantasy Star II introduced to its audience.

In the game, you played as a young special agent named Rolf (or whatever other four-letter name you could think of), who's tasked with investigating the overabundance of dangerous creatures infesting his planet. Together with his enigmatic companion Nei, the two set off on an adventure that ultimately spans worlds and leads them into the heart of a sinister plot that may mean the end of their entire solar system...at the hands of a foe you'd never expect.

Phantasy Star II's beautiful visuals and stunning soundtrack quickly drew you into its science fiction world. Fans of the original game lamented the omission of first-person-perspective dungeons as well as different backgrounds during combat sequences. But these specific points were soon forgotten as Phantasy Star II worked its magic. Though the game was heavily reliant upon one random monster encounter after another, the presence of so many types of foes, so many types of weapons, and so many different player characters meant that this core gameplay was compelling and addictive. Phantasy Star II was filled with many hard-fought battles, culminating in a series of climactic encounters that epitomize the drama and the challenge of this style of gaming.

A decade and a half later, the Phantasy Star series lives on, but in a very different form. Phantasy Star III, released in 1990, was largely considered a disappointment despite its innovative attempt to let you play through several generations of characters during the course of the story, while 1994's Phantasy Star IV was released late enough in the Genesis' life cycle that it didn't garner the same level of attention as the previous titles. After that, Phantasy Star spun off into online role-playing with the innovative Phantasy Star Online, and it even turned into a collectible card game. However, we're still holding out hope that the series will return to its roots one day. 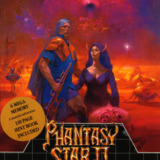