Japanese-style wrestling clotheslines its way onto the Xbox 360.

TOKYO-As part of its Tokyo Game Show 2005 display, Microsoft is showing off a new pro wrestling game called Wrestle Kingdom. The demo on display featured only four different wrestlers and one ring background, but the gameplay seemed to be on par with what you'd expect from the genre, and the graphics are definitely looking good.

The game will feature licensed, real-life pro wrestlers from Japan, and though the game was being shown only in a single-player configuration, it appears to support up to four players. The gameplay is fairly standard for the genre and is yet another version of Yuke's take on the AKI gameplay style made famous back on the Nintendo 64. You'll have one button for strikes and another for grapples. Once grappled, you can slam on different buttons and directions to get different moves out. There's also a run button, and the triggers are used for different types of counters. The right analog stick is used to taunt, and when you get your voltage meter full, tapping that right analog stick sets you up to do your wrestler's finisher, which is done by hitting the grapple and strike buttons at the same time.

Animationwise, Wrestle Kingdom's holds and moves don't seem to be worlds above what we're currently seeing on today's consoles. The models and textures, however, are a different story. The models are high-poly, giving them a smoother, more-lifelike quality. The textures are also very sharp, which helps to make for some nicely realistic facial animations. The crowd also looks pretty good. The visuals definitely help this game stand out.

With gameplay modeled after the style of gameplay that wrestling fans crave and some sharp graphics, Wrestle Kingdom could shape up to be a winner. But given the wrestling climate in North America, it seems unlikely that this game would come out there at all, whether in its current form or as the framework for another American wrestling license. 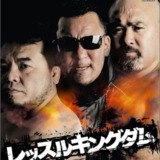