SNK Playmore confirms a title for the next arcade King of Fighters and briefly discusses a new game in the series under development for the PlayStation 2.

The company also showed off a short trailer for a new game in the King of Fighters series that is being developed specifically for the PlayStation 2. The trailer didn't show any gameplay but instead focused on lines of dialogue from some of the game's new characters, who were shown in a cutscene-style prerendered polygonal form. This game is currently known by the working title of KOF, and it appears that the game will be a 3D fighter. It will be released sometime in 2004. 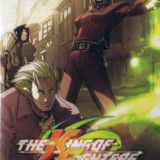