When it comes to licensed properties, few are as prized as the rights to Marvel Entertainment's roster of superheroes. The comic-book empire is responsible for several top-grossing films and games, including those based on Spider-Man, The Hulk, and X-Men.

According to Marvel's executive vice president David Maisel, the game-rights licensing will continue next year with the sequel to the film Fantastic 4. Maisel confirmed that game adaptations will be released alongside the film next year, but that the team responsible for the original won't be around for the sequel.

During Marvel's earnings call today, an analyst asked Marvel to confirm that Take-Two Interactive was producing the game. Maisel replied, "That is a new [licensing] relationship for that game which will be released with the movie next year. And that game is going on schedule, as well."

Activision, which has been the benefactor of several Marvel licenses, worked with developers Beenox, 7 Studios, and Torus Games on the original Fantastic 4 game. Now, with Iron Man going to Sega and Fantastic 4 going to Take-Two, it appears as though Activision is passing up the rights to superhero games that aren't so super. However, Activision still holds the rights to two Marvel juggernauts--Spider-Man and X-Men.

Marvel did not announce any platforms for the new Fantastic 4 game. Take-Two did not respond to requests for comment as of press time. 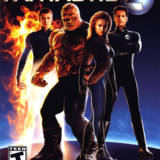