Supreme Commander, the real-time strategy game from Gas Powered Games, is one step closer to release. THQ today announced that the game has gone gold and is on schedule to make its ship date of February 20.

In the game, three warring factions are at odds in the 37th century. Gamers will take control of air, land, and sea units and take on three single-player campaigns and battle other human-controlled armies in online multiplayer modes.

Supreme Commander is rated E10+ for Everyone 10 and Older and will retail for $49.99. For more information, read GameSpot's previous coverage. 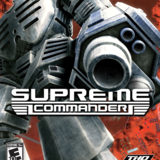