Xbox 360 version of Capybara's downloadable game pushed to 2014, will debut next year alongside Xbox One version.

Capybara Games made two Super Time Force announcements today. First, the Xbox 360 version has been delayed to 2014 just months after the company said it would release in 2013 "for sure."

The studio also announced today that Super Time Force is in development for Xbox One and will launch alongside the Xbox 360 version "a bit into 2014."

Capybara Games will self-publish the game on Xbox One via the ID@Xbox program.

In a co-statement from Capybara Games president Nathan Vella and creative director Kris Piotrowski, the pair explained the reasoning behind the delay.

"To accommodate development of the Xbox One version, and to make sure we bring you the best game possible, we’re moving the release date," the pair said. "While we had originally intended to release this year, the opportunity to do Super Time Force on Xbox One, plus the sheer insanity of releasing during new console launches meant that moving a few months into 2014 was the best plan for our game."

"We take our time and we aim for the stars, but that often results in the intervals between our games being longer than we (or our beloved fans) may anticipate," they added. "We appreciate the love & support, and see you in 2014!"

Super Time Force is now the third 2014 game Capybara is working on and the second coming to Xbox One, following next year's mysterious roguelike Below, which will launch on the system as a timed-exclusive. 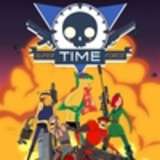