Nintendo's upcoming 3DS title shows off the fun, interactive side of submarine piloting.

Cinematic classics like Das Boot and The Hunt for Red October have painted a pretty intense (and somewhat bleak) picture of submarine piloting. Thankfully, Nintendo's upcoming Steel Diver shows off a lighter side to commanding submersible vehicles. We were able to try a playable demo at the 3DS New York press event that let us sample some of the game's modes.

Who's Making It: Nintendo's EAD development studio is developing the game, which many will likely remember started life as a tech demo on the original Nintendo DS back when it was first shown off. Anyone worried that the tech demo is just being dumped on the DS with some bells and whistles can rest easy, because the EAD team has fleshed out the simple mechanics in the demo and expanded on them in a number of ways that play to the 3DS's strengths.

What It Looks Like: The demo we tried featured two modes that each had a distinct visual style to them. Mission mode used a traditional side-scrolling view that leaned heavily on subtle visual effects, such as light diffusing through water, to craft a clean, detailed look that's easy on the eyes. The visuals in Periscope mode made use of a first-person view that didn't impress us all that much. How It Uses 3D: The two modes we played made different uses of 3D that showed off an interesting range. The side-scrolling Mission mode plays with depth and looks like you're peering into a small aquarium. The various lighting effects and little details--like sea life and air bubbles--popped nicely. Periscope mode is more straightforward, dropping you eyeballs-first into the action. It worked well but didn't really stand out. What You Do: We were able to try out two modes and get info on a third that all focused on controlling a submarine. Mission mode challenges you to guide your submarine to a goal on the other side of a map in some side-scrolling action. The trip to the goal isn't a cakewalk, thanks to obstacles ranging from trigger-happy enemy craft above and below the water and natural hazards that will keep you on your toes. Periscope mode is a timed first-person mode where you're viewing the action through your submarine's periscope and blasting enemy ships while avoiding their shots. While we weren't able to try it in the demo on hand, we asked about the Steel Commander mode, which is a turn-based multiplayer game that features a turn-based strategy mechanic that sounds like a cross between chess and the classic board game Battleship. How It Plays: Control in the game changes between the different modes. Mission mode is the most complicated of the two, forcing you to multitask with the stylus on your touch-screen control panel. You'll manage controls to adjust your forward and backward movement as well as your ascent or descent. A "mask" button lets you fire the underwater equivalent of chaff to throw off enemy missiles coming at you. You'll be able to get in on the missile action yourself with controls to fire torpedoes above you or in front of you. Finally, for the medium and large submarine, you'll be able to manage your craft's pitch as well. In addition, you'll need to keep an eye on your ship's air gauge to ensure nothing horrible happens to your crew. The mechanics change up considerably for Periscope mode, and you'll rely on your thumbs and the rest of your body. The mode actually uses the 3DS's internal gyroscope to track your movement, so you'll be turning your body in place to change your view and line up shots. The touch-screen controls are simplified somewhat from the mission mode to be more thumb-friendly. You'll have levers to zoom your view and dive, and buttons to fire torpedoes. You'll also be able to do some repair work by holding your thumb over leaks that spring up when you're shot. The simple system works well for the mode's arcade-y feel.

What We Say: While it's not a dazzling showcase for the 3DS's power, Steel Diver makes interesting use of the hardware by being focused on its submarine gameplay. The visuals are varied--some are good and some have an underwhelming effect. But this game's appeal is going to rest on its gameplay, which is surprisingly addictive. Mission mode seems like it could be a pretty powerful hook thanks to a time trial option. Although Steel Diver may not have the flash of other 3DS titles, it's one to keep an eye on. Look for more on the game in the coming months. 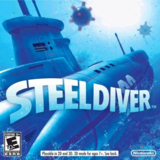