The Star Wars movies are an excellent source of inspiration for game developers, and indeed, there have been dozens of games across the spectrum of genres since the original, Episode IV: A New Hope, hit the silver screen in 1977.

Thanks to games such as 1990's Wing Commander, the popularity of space combat sims spiked in the early '90s, and the Star Wars flight sims on PC are remembered as some of the very best of the day. X-Wing kicked things off in 1993, but it was 1994's TIE Fighter that moved the genre forward. LucasArts capitalized on the storage capacity and rising availability of CD-ROM drives, and after players fought for the familiar rebel forces in X-Wing, TIE Fighter gave them a refreshing glimpse through the eyes of the Galactic Empire.

Given that it's Video Game History Month at GameSpot, and TIE Fighter's 20th Anniversary is coming up, now's the perfect time to recollect what made it such a landmark game for the genre, not to mention one of the best games ever set in the Star Wars universe, space-sim or otherwise.

In 1993, Star Wars: X-Wing was released. It was the best space combat simulator ever made, and not just because it let you live the dream of flying an X-Wing in the Star Wars universe, though that was certainly part of it. No hollow cash-in on the Star Wars license, the game made the most of the universe, throwing you into all kinds of gripping and believable combat scenarios rising out of the ongoing conflict between the Galactic Empire and the Rebel Alliance. It also looked amazing, using polygonal models for spacecraft unlike most of its contemporaries. Seeing a TIE Fighter fly apart in pieces when you blasted it offered a sense of satisfaction that the non-polygonal graphics of the rival Wing Commander series just couldn't match. And the emphasis on power management--having to decide how much energy to allocate to lasers, shields, and engines--made your victories about more than just your skill in a dogfight.

X-Wing's excellence only made it that much more astounding when its sequel, TIE Fighter, somehow managed to improve upon it. But what I found most fascinating about TIE Fighter wasn't the improved gameplay or the great mission design or the shaded graphics. It was the way that the game made me think about the empire, and about portrayals of villainy in general, in a new way. In the Star Wars films, the empire is evil to the core. But TIE Fighter let you see the empire from a new perspective. The game didn't make you feel like a bad person doing bad things, but like a pilot who might reasonably have believed that what he was doing was in the galaxy's best interests.

Now, some 20 years later, it's extremely common for games to let you choose to be good or evil, but more often than not, I find that such choices lack any subtlety or nuance. Typically you end up feeling like either a paragon of virtue or a caricature of evil. TIE Fighter dared to put you on the side of the "bad guys" long before most games ventured into such territory, and it explored moral ambiguity better than most games that have come since. You weren't out to crush the forces of good. You were just trying to maintain order in a chaotic galaxy. Playing TIE Fighter didn't change my feeling that the empire was an evil entity. In fact, the power of its propaganda only made the empire a more terrifying regime in my eyes. And I never saw the individual cogs in its machine--the deluded stormtroopers and TIE Fighter pilots and other rank-and-file officers--quite the same way again.

TIE Fighter dared to put you on the side of the "bad guys" long before most games ventured into such territory.

X-Wing may have had you flying for the good guys, but TIE Fighter was always the cooler game for a variety of reasons. Despite using the same engine as X-Wing, TIE Fighter was hands-down the best looking, featuring impressive details on ships both small and large. It also had a 3D model of the ship you were currently targeting right in the middle of your cockpit console, which rotated depending on your angle to your opponent. Not to overstate it, but that was pretty mind-blowing for me at the time. The game also boasted an impressive array of ships to fly in and against, giving TIE Fighter an excellent variety of space dogfighting experiences.

But by far the most indelible thing for me was those missions piloting a standard TIE Fighter. After flying ships with shields in X-Wing, suddenly being thrust into the midst of battle without any external protection was wholly intimidating. Each mission I flew in the TIE fighter was white-knuckle, and I can still feel the thrill of having survived many intense battles, not fully aware of how exactly I managed to avoid being blown to bits. If I were a superstitious Jedi, I'd say the Force was guiding my hand. But I wasn't. I was on the dark side, and I loved it.

I wasn't around for the theatrical release of the original Star Wars trilogy, but I grew up watching the movies from the comfort of my parents' basement on a regular basis. I reveled in Luke's transformation from an eager young farmer into a plucky, adventurous rebel, and yearned for the sort of excitement embodied in scenes like the speeder bike chase in Return of the Jedi.

I loved the tense conflicts that brought acts to an exciting head. Of course, lightsaber battles are the most iconic, but for as much joy as I got out of watching two Jedi clash, mano a mano, I was doubly drawn into the heated battles between X-Wings and TIE Fighters. This was partially due to my affinity for spacecraft design, but I think what really struck me was that piloting fighter craft was something I could theoretically do. Not just anybody could become a mystical warrior, but pilots were average people with daring and quick reflexes. That could be me.

For a time, I lived out this fantasy in LucasArts' space-combat sim X-Wing, but its sequel, TIE Fighter, was the more impressive and captivating game. The CD-ROM version of TIE Fighter came with enhanced, high-resolution graphics (640x480), and new voice-overs that added to my sense of immersion. Granted, nowadays these elements are less impressive, but at the time, TIE Fighter was all I needed to feel like a space pilot in the Star Wars universe, and ultimately, it's the game that I credit with my current love of space combat games. 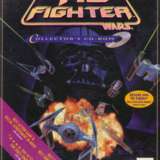