It'll take some getting used to, but gamers can now expect to see a Square Enix logo the next time they purchase a new Tomb Raider or Hitman game. This week, the Japanese publisher closed on its £84.3 million ($120 million) acquisition of ailing UK-based Eidos, a deal that found overwhelming support from the Tomb Raider publisher's board of directors and shareholders. 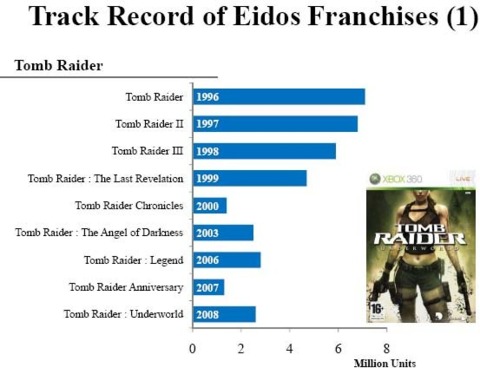 This week, the Japanese company also provided a blanket overview of how it plans to integrate Eidos into the Square Enix Group, which also includes 2005 acquisition Taito. As part of a corporate strategy presentation, Square Enix offered a brief look at the sales performance of its own games as well as those of Eidos.

Of particular note, the publisher put a number to just how successful the Final Fantasy franchise has been, saying that more than 85 million units have been sold since the first installment was released in 1987. Also an impressive seller, the Dragon Quest franchise has moved 47 million units during its nearly 23-year run. There's a significant gap between the publisher's second and third best-selling series, considering that the Kingdom Hearts franchise has logged sales of 12 million units since the Disney collaboration began in 2002.

Eidos' best-selling franchise, Tomb Raider, has sold 30 million units since 1996. The bulk of those sales can be attributed to the first four installments in the franchise, with the 1996 original having sold approximately 7 million units. The Hitman franchise has proven to be Eidos' second-best performer, with Square Enix saying that the series has sold 8 million units since 2000. Fellow IO Interactive game Kane & Lynch has sold just shy of 2 million. Other notable Eidos sales figures include Deus Ex and its 2003 sequel selling a combined 2 million units, and Just Cause selling just more than 1 million copies. 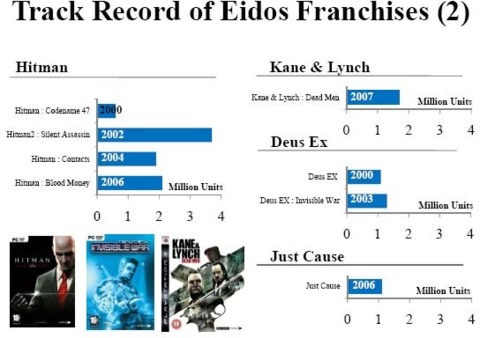 There are 238 comments about this story
Load Comments (238)