Rising Star's new game based on the Taito classic will be overseen by gaming icon Tomohiro Nishikado.

Classic gamers remember the feeling of a fleet of pixelated enemies descending on them while droning music speeds up, indicating a you-or-them situation. The year was 1978, and the game was Space Invaders, one of the most notorious quarter-sucking arcade machines of all time.

Game publisher Rising Star Games today announced that Tomohiro Nishikado, the brains behind the original arcade version of Space Invaders, is personally watching over the development of a DS revision of the Taito classic. Scheduled for release in the second quarter of 2005, Space Invaders Revolution is trying to stay close to the game's original concept.

"Since 1978, Space Invaders has gone through many iterations, some of which have lost the spirit of the original game," says Mr. Nishikado. "With Space Invaders Revolution, I wanted the team to take the game back to its roots, whilst at the same time adding features which would appeal to modern gamers. The result is a game which is as fresh as the original but which will equally [appeal] to those too young to remember the arcade game."

Rising Star also announced new details on the alien shooter. The game will feature a faithful rendition of the arcade version, as well as a modernized globe-trotting "new era" mode. New era adds different elements to the core gameplay, such as power-ups and stage-specific conditions. For example, when defending London's Big Ben, gamers will have to blast invaders in a certain order.

The game will feature 20 different global locations and 60 stages. New invaders, such as giant armored aliens, which must be destroyed piece by piece, and shadow invaders that use cloaking devices, bring the total types of enemies to 13.

Space Invaders Revolution is awaiting rating and pricing information. GameSpot will have more on the game as details are released. 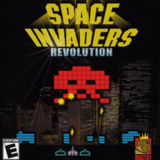