Shadow of Rome is the latest game from Capcom that aims to serve up a small slice of the action and intrigue of Rome during the reign of Julius Caesar. The original PlayStation 2 game is being developed by the team responsible for Onimusha 2 under the guidance of producer Keiji Inafune, whose work on the Onimusha and Mega Man franchises has earned him a reputation for quality titles. The game was officially announced today, and we've had the opportunity to get an early look at it and talk to Inafune about this most promising entry on his resume.

Shadow of Rome's story is set in the year 44 BC. The leadership of the Republic of Rome has been tarnished by political corruption, and Roman society has been overrun by unruliness and violence. Julius Caesar advocates for drastic reform into imperialism in order to restore Rome, but he is met with opposition. However, being the stubborn sort, old Julius keeps on pressing for change. Unfortunately, as any history buff can tell you, things don't work out quite like he'd hoped. Caesar is murdered before the changes he had advocated could be implemented. As the news of the head of state's demise starts to spread, a soldier named Agrippa rushes back to Rome to be faced with even worse news. Agrippa's father, Uesnius, who was a close advisor to Caesar, is the accused murderer. Unlike today's poky court system, the Roman judicial system keeps a pretty brisk pace and slates Uesnius for public execution by the winner of the next gladiatorial event, which is coming up fast. Anxious to keep his father alive, Agrippa sets out to prove his innocence and uncover the truth about Caesar's assassination. Thankfully Agrippa isn't in this alone. He has the help of his best friend, Octavius, and a freed female gladiator named Claudia. As you'd expect, the road to help Uesnius is a long one, chock-full of murder, intrigue, false accusations, and a whole lot of spilled blood in gladiatorial combat. An interesting twist to the narrative is the extended cast of characters you'll interact with, which will include actual historical figures.

While it's certainly a shame about Agrippa's father, the resulting adventure looks as though it's going to make for some really involving gameplay. Shadow of Rome is set to have a unique gameplay system that will combine two distinct styles of gameplay--action and stealth--in intertwining levels that will unfold in accordance to how you play. From what we've seen so far, the game will alternate between letting you play as Agrippa or Octavius, depending on the level. Agrippa is the well-trained, deadly fighter of the two. His levels will be action oriented and will revolve around the sorts of things you'd expect to see a gladiator engaging in. You'll fight single- or multiple-opponent battles in an arena, engage in chariot races, or fight on a ship at sea. You'll also engage in some pretty slick battles against animals such as lions or in assaults using catapults against structures in the arena. Combat appears to lean slightly more toward realism than in the Onimusha series and most of the gladiator games that have come out so far. Agrippa will rely on a mix of strength and resourceful use of whatever weapons are at hand or can be taken from an enemy.

Octavius, on the other hand, is something of an average joe who didn't opt for the gladiator lifestyle. As a result, his levels will require you to outwit your opponents in a number of ways. In some cases you'll just want to find a way to sneak past obstacles; in other cases you can use your brain more directly and collect items you can combine to form weapons such as primitive Molotov cocktails. You'll even be able to steal people's clothes and go around in disguise if you have to. While it appears that most of Octavius' levels will offer a much more cerebral change of pace from Agrippa's gameplay, we've seen footage of him getting his kill on and taking out an unsuspecting foe.

Shadow of Rome's gameplay has a few unique elements that appear to complement each other nicely. As we mentioned earlier, your experience in the game will be affected by how you play it. From the sounds of it, the path through the game will branch to some degree based on how you play. For example, if you tend to do well in the action segments as Agrippa, you'll end up opening up more of those types of levels, whereas if you do better as Octavius, more stealth levels will open up. Your performance will obviously be affected by how Agrippa and Octavius handle, which is where the team has focused its efforts. While Shadow of Rome will offer a varied gameplay experience, Inafune mentioned that one of the goals in designing the game was to ensure that the controls managed to stay as accessible as possible. As a result, the basic control scheme won't change on you as you tackle the various gameplay types.

The graphics in the game are looking quite sharp, thanks to the team's use of the Onimusha 3 graphics engine, which has been modified some from the version used in the upcoming final entry in the Onimusha series. The robust and ambitious graphics engine pumps out an impressive number of polygons that are complemented by clean textures, lighting effects, and a number of visual filters and particle effects that certainly help bring the world to life. You'll see everything from striking lighting effects used to highlight dawn or dusk, to clouds of dust kicked up during chariot races or catapult battles. The powerful and fully 3D engine creates a rich world to explore that offers plenty to appreciate. You'll see diverse environments, such as a bustling marketplace, vast forests, sea vessels, citadels, and the Colosseum. But the most impressive aspect of the graphics at the moment has to be the wonderfully gruesome way in which you can hack up your opponents. While the game is still essentially a work in progress, we were able to see a generous amount of dismemberment and blood during combat, which looks as though it's going to be pretty satisfying when you're in the thick of it.

The audio in the game is still coming together, but it appears to be headed in the right direction. The footage we've seen has audio for the characters and sound effects for the audience and for the clang of weapons. However, the soundtrack is still being worked on. The final game will support Dolby Pro Logic II to give the roar of the crowd and the sounds of battle an immersive punch.

From what we've seen so far, Shadow of Rome is a promising and pleasant surprise from Capcom. The game looks quite striking, thanks to the Onimusha 3 engine and an ambitious environmental scale that pushes the PlayStation 2. The varied gameplay, and its reaction to your play style, should make for an engaging experience. Shadow of Rome is currently slated to ship this winter for the PlayStation 2. Look for more on the game in the coming weeks. For a look at an exclusive video interview with producer Keiji Inafune, visit our media page. 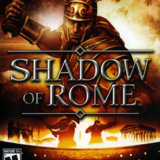