Just because Sega's hitting the reset button on the Sonic the Hedgehog franchise for next-generation systems, that doesn't mean the company is abandoning all of its Sonic efforts from this generation. As evidence of this, Sega announced today that it is publishing the Sonic Advance & Sonic Pinball Party Combo Pack for the Game Boy Advance.

Originally released in 2002, Sonic Advance brings Sonic, Tails, Knuckles, and Amy together to once again thwart the evil Dr. Eggman and his schemes in the series' traditional platform style. Sonic Pinball Party, on the other hand, was at once a departure from the series' formula and a throwback to Sonic Spinball on the Genesis. The combo pack is rated E for Everyone and will be released in November for $29.95. 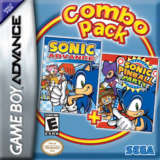