A trademark filed earlier this week for Shenmue III has turned out to be fake.

“Sega has confirmed that the recent application for the trademark of Shenmue III is a fake and is looking into the origins of this application,” the publisher told GameSpot in a statement.

The trademark's listing within the European Office of Harmonization for the Internal Market (OHIM) has now been removed. The hoax was filed on Monday, and covered "computer game programs," "computer game software," and "video game discs and cartridges," among others.

The cult series, originally planned as a trilogy for the Dreamcast and left unfinished after the second game, has not been seen since the release of Shenmue II on the original Xbox in 2002.

It was revealed earlier this week that series designer Yu Suzuki will hold a post-mortem of the Dreamcast original at GDC 2014, with translation services being provided by PlayStation 4 architect Mark Cerny.

Shenmue III's rogue trademark filing follows a similar incident for Fallout 4, with both hot on the heels of a heavily-publicised attempt to falsely register Half-Life 3 earlier this year. 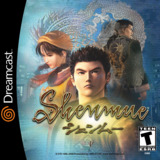