The development team behind the Aero Dancing series has started work on a Robotech game.

In the latest issue of Famitsu magazine, Sega-AM2 and Bandai revealed that they're codeveloping a PlayStation 2 game based on the popular anime Macross. The anime is better known as Robotech in the United States. The new game, Chou-jikuu Yousai Macross, is a 3D shooter currently being developed by the members of the AM2 team responsible for the Aero Dancing series. The title will be published by Bandai, which requested that Sega work on the game after seeing the potential of Sega's Aero Dancing engine. The controls in the game will not be as complicated as those in Aero Dancing, but there will be additional controls that advanced players can use.

In Chou-jikuu Yousai Macross, players will take control of the Valkyrie plane and fight against the Zentraedi army. Much like in the original anime, the Valkyrie can transform into three different modes: fighter, gerwalk, and battloid. Each mode has different abilities. For example, the fighter is fast and can fire missiles rapidly, while the gerwalk can hover over the ground while shooting missiles. The battloid mode can't shoot missiles but has a laser cannon to shoot down enemy fire. The developers said that they are aiming to create the ultimate Macross game, and will not make a game that just relies on its license.

Chou-jikuu Yousai Macross is scheduled for release in October in Japan. The title is currently 70-percent percent complete. 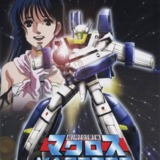