What lies beneath the waves. 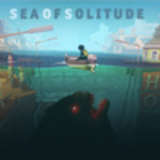 Coming from Jo-Mei Games, Sea of Solitude is the next EA Originals title, following 2018's A Way Out from Hazelight studios. Taking an unorthodox approach to something of a well-worn adventure premise, you'll explore the ruins of a seemingly flooded world that's completely abandoned. But therein lies the hook; in this puzzle-adventure game, that sense of isolation and loneliness is palpable, which is reflected in the struggles the main character has with her own mental state. While at E3 2019, we had the chance to check out a near-final build of Sea of Solitude and spoke with the CEO of Jo-Mei Games, Cornelia Geppert, about why it's essential for more games to tackle some challenging issues like mental health.

Beginning in a rowboat, the protagonist Kay comes across a flooded city in the middle of the ocean. As she maneuvers through the canals and alleys of the town--which is loosely inspired by Berlin--she'll encounter evil blights that seem to have a deep connection to her--shouting vile insults that seem akin to intrusive thoughts. By finding the strength within herself to explore further, she will be able to restore the city, slowly raising the buildings from beneath the surface and restoring color to the different areas of town. Even from the short demo we played, it's evident that Sea of Solitude tries to tackle the complex and challenging topic of mental health, and the creator describes the game as the most important project the studio has ever made.

Now Playing: Swimming Through The Sea of Solitude

"I want people not to feel so bad about feeling lonely, and that they understand that almost everyone experiences that in some way and that it's a part of human life," said Cornelia Geppert. "It's a very human story. You never quite overcome your worries and fears, and this game isn't a superhero story where everything is perfect after you finish it. But it's about how you come down and relax about life, suffering and pain is a part of life, and it's something that [Sea of Solitude] focuses on a lot."

Described as a "wide-linear" game, you'll have the freedom to explore and row about the flooded city. However, it's not quite an open world. While you do have the freedom to choose which direction to sail towards, there is largely a set path to follow through the city that leads to the key moments of the story. While there are major story threads to follow, you can also leave your boat and explore some of the abandoned buildings, letting you search through the remains of the homes that once were.

Although there's always an element of danger in Sea of Solitude--even leaving your boat to swim in the water puts you at risk of getting eaten--I found that the game had something of a relaxing cadence, despite how heavy some of the subject matter was. In some ways, this made me more drawn into what Sea of Solitude was trying to say about Kay's journey. According to Geppert, video games are in a unique position to tell exciting stories that put players in the shoes of characters that are in occasionally extraordinary, but still relatable circumstances.

"Compared to films, you can actually experience the feels and situations of the main character in a game," said Geppert. "The main goal of Sea of Solitude is for people to experience those feelings of loneliness and despair. I also want people to see that characters like Kay are not perfect and that they have flaws, which is something we all live with. It's a very human look at the struggles of keeping up with your mental health."

Much like other games tackling the topic of mental health, the developers at Jo-Mei focus a lot on putting you in the shoes of Kay to understand her present circumstances. That feeling of empathy is a big part of Sea of Solitude, and many of the events that occurred in our brief demo were incredibly relatable in some form or another, which will undoubtedly hit close to home for some players. There's a fine line Sea of Solitude walks with its topics of mental health, and I couldn't help by be intrigued by how this game goes about its handling of a troubled woman dealing with her inner demons, and what that means for the larger adventure she finds herself on. I have a deep respect for games that at least try to talk about issues relating to mental health, and Jo-Mei Games' approach with their game is both haunting and empowering--in its own way.

Sea of Solitude will launch on July 5 for PC, PS4, and Xbox One.