An early build of the Xbox version of SNK's latest weapon-based fighting game was playable on the E3 show floor. We were totally there.

The most eye-catching game on display at SNK's E3 floor space was probably Samurai Shodown V, a 2D weapon-based fighting game featuring a roster of 26 big, colorful characters--including most of the long-running series' old favorites. Though a PS2 version of the game is already available in Japan, from the looks of things, we're only going to see an Xbox version hit these shores. On the plus side, though, that version of the game--like all of SNK's Xbox fighting games--will feature online play, including a tournament mode designed to distinguish the best of the best. We've played previous versions of Samurai Shodown V before, so we were able to quickly get our hands on the Xbox version to note what still needs to be done before this becomes an arcade-perfect port.

While all the artwork and characters were present in the Xbox build of Samurai Shodown V that was shown at E3, we noticed that the game was running at less than normal speed, and some of the controls and collision detection still needed work. So this version of the game is still clearly a work in progress, though there ought to be plenty of time between now and October (when it's scheduled for release) to tune everything to where it needs to be. Still, it was good to see the complete character roster there, featuring old favorites like Haohmaru, Ukyo, Charlotte, and Hanzo, along with more than 10 brand-new characters, including some designed by popular manga artist Nobuhiro Wazuki (known for his work on the samurai-themed anime Rurouni Kenshin).

According to SNK's sell sheet, the Xbox version will also sport some unique features above and beyond the obvious allure of Xbox Live support. Specifically, it sounds like new combo moves not found in the arcade original will be available here. Presumably, the extra time will also be used to help address whatever balance issues may have been exposed since the release of the arcade version. Since Samurai Shodown V will be playable on Xbox Live, it'll be important for all the different fighters to stand a relatively good chance at winning, if controlled skillfully.

Samurai Shodown V features brand-new backgrounds and character artwork, though many of the animated 2D sprites you'll see duking it out actually date back to Samurai Shodown III. The game still looks quite good, since the large characters show a lot of personality, but don't expect cutting-edge visuals; this game looks like a throwback to the good old days of 2D fighting. The core of the gameplay sure hasn't gone out of style, either, and Samurai Shodown V also adds some new touches, like "spirit strength," an ability that can cause your opponent to go into slow motion temporarily, making it easier for you to lay into him.

We were glad to see Samurai Shodown V there among SNK's solid lineup of online-enabled fighting games, and its cast of new and old fighters made us eager to see the game shape up into a perfectly playable state. Also, in light of releases like King of Fighters 2002/2003 and Metal Slug 4 & 5, it made us long for an online-enabled compilation of the original two Samurai Shodown games, which remain some of the best 2D fighting games ever produced. We'll happily take what we can get from this unforgettable series, though. 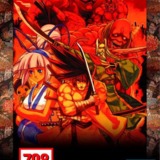