Samurai Shodown's second season pass begins on February 26 with the release of a new DLC character, Mina Majikina. Mina is available for $6, or as part of the $20 season pass, which will give players four new characters to use.

SNK released a trailer for the character, who first appeared all the way back in 2003's Samurai Shodown V. You can watch it below and get a look at her moveset.

The other characters announced so far for this season pass are Iroha and Sogetsu Kazama. The fourth character remains a secret.

Samurai Shodown has been announced as part of the Evo 2020 line-up, further securing its position as one of the top current fighting games. The game is due to release for Switch on February 25, the day before this character releases. Players who preorder the game for Switch will also receive a copy of the classic Samurai Shodown! 2.

Samurai Shodown received an 8/10 in GameSpot's review, with critic Heidi Kemps praising the game as a strong reboot: "It captures what made the original fun and unique, but also at a time when high-damage, high-stakes fighters like this are a rarity, making its combat feel both fresh and familiar." 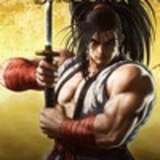