The first two RollerCoaster Tycoon games, widely considered to be the series' best, have been combined today for a new release on iOS and Android devices.

Atari also says Classic includes "hundreds of types of roller coasters and rides, and dozens of different shops, stalls, and facilities." There are also 95 scenarios to play through, manageable staff, and you can still select from pre-made coasters or build your own from scratch.

What's particularly noteworthy about this release is that it's not free-to-play. Classic is a $6 purchase (iOS/Android) with none of the usual microtransactions seen in mobile releases like this. The only other things to spend money on are expansion packs (Wacky Worlds, Time Twister, and Toolkit), which go for $2 a pop. This fact is featured fairly prominently in the game's description, signaling Atari's awareness that fans may be wary of a game that asks them to pay to continue playing.

This isn't Atari's first go with the series on mobile. It previously launched a premium version of RCT3 on mobile, and the much-anticipated RCT4 ended up being a free-to-play mobile game. It was not warmly received by those hoping for a proper PC game, which we received more recently in RollerCoaster Tycoon World. That, too, has been criticized by many fans, with Planet Coaster instead being deemed by many as the best new theme park simulation game. 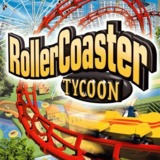