Rodea The Sky Soldier Is Being Delisted, And That's Interesting News For Collectors

This strange Wii U game was already a collector's item.

Rodea the Sky Soldier, a 2015 Wii U/3DS/Wii title, is being delisted from the Eshop on both Wii U and 3DS. It will no longer be available for digital purchase from September 30 in North America or Europe.

The game, which was produced by Sonic the Hedgehog programmer Yuji Naka, was a critical failure, and under normal circumstances this would not merit reporting on--but Rodea is a game with a strange history. This is already a game that feels somewhat destined to become a collector's item.

The first print run of the game on Wii U came with a copy of the game on Wii, too--the game was originally developed with the Wii in mind, before moving to the Wii U. While the game did not do well on Wii U, reports suggested that the Wii version was much better, with better art and improved gameplay.

Now, with the Eshop version of the game being delisted, the Wii U and 3DS versions of Rodea are about to become a lot more limited, too. A complete version of the game with both discs will currently set you back about $60 on Ebay, and the removal of the game from digital services could ultimately drive those prices up.

This isn't the only game that will be delisted this month--Xbox One owners should pick up Forza Motorsport 3 while it's still available. 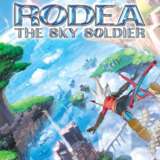