Rock Band 3 confirmed for this holiday

Harmonix and MTV Games getting the band back together, Electronic Arts handling distribution once more.

After devoting last year's installment of the Rock Band franchise entirely to The Beatles, Harmonix and MTV Games are getting back to their roots. The pair announced via Facebook today that Rock Band 3 is set for release this holiday season. Electronic Arts will once again be handling distribution duties.

The Facebook status update promises that Rock Band 3 "will innovate and revolutionize the music genre once again," but provides no other details. Platforms, new features, song lists, and other details will be revealed at a later date.

While it will have been two years since Rock Band 2 hit shelves, the rhythm franchise has not been inactive. In addition to the Beatles game and weekly updates to the downloadable catalog of songs, last year saw the series try to broaden its appeal with Lego Rock Band, and this year will see punk act Green Day receive its own dedicated game. Harmonix also just launched the Rock Band Network, a separate (and more open-ended) online storefront that allows all manner of independent artists (and some of their studio counterparts) to make their songs downloadable, provided they take care of the developmental heavy lifting. 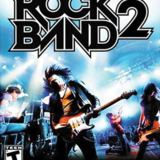