We break a sweat spraying rabbits in the face with carrot juice at the 2006 Games Convention in Leipzig, Germany…seriously.

LEIPZIG, Germany--Because of the Wii controller's unique capabilities, it seems inevitable that it would be used to kill rabbits. Wait...what? OK, so the premise for Ubisoft's upcoming Wii game, Rayman Raving Rabbids, is admittedly off the wall. It's a collection of minigames in which you, as Rayman, must shoot, race, and dance in an effort to rid the world of hundreds and hundreds of pesky little "rabbids," which are cute little white bunnies. Knowing that, we hopped at the opportunity to get our hands on a Wii controller to see how the concept of motion has been implemented into this collection of rabbit-unfriendly minigames.

The minigames in Rayman Raving Rabbids are divided into a handful of categories. There are first-person shooter, racing, and rhythm minigames. Within each category there are several minigames to choose from.

The first game we saw was a dancing minigame where Rayman stood in the middle of a dance club dancing to the Pulp Fiction theme song "Misirlou" by Dick Dale. As Rayman danced, rabbids approached from both sides of the stage. Just as each rabbid reached a lighted circle, we had to move the nunchaku and the remote to "smash" them. Moving the nunchaku smashed the rabbids on the left side, and the remote smashed the rabbids on the right side. As the song played on, the difficulty increased, and the rabbids began approaching faster and faster.

The second minigame we played was called "Rabbids love carrot juice." In this game we sat behind a bar at a tropical island resort. Rabbids in scuba gear slowly emerged from the water and walked up the beach toward us. To thwart their advances, we had to drown the rabbids with carrot juice. This minigame played like a shooting gallery; we were unable to move and simply had to aim with the remote. However, the challenge comes from keeping the carrot juice flowing. To pump carrot juice at the rabbids, we had to violently shake the nunchaku attachment up and down. It can be tricky because you have to aim with one hand while shaking the other as fast as you can. We played for close to three minutes in a hot, cramped demo room, and by the end we had worked up quite a sweat, which gives you an idea of just how active you have to be with the Wii controller.

The next game we played fell under the first-person shooter category, but it played more like a rail shooter. We moved around a stage on rails, using a toilet-plunger gun to shoot all the rabbids that popped up from behind objects in the environment. Again the aiming was done with the remote, but this time the nunchaku was used to reload. By shaking the nunchaku we got a fresh ammo supply. You have unlimited ammo, but your gun can hold only half a dozen plungers at a time. That means you have to shake that nunchaku every few seconds. There are several different-themed stages to choose from in this mode, although based on what we saw, they all seemed to play very similarly.

We also checked out a couple of games in the racing category. The first race had Rayman riding on the back of a huge rhinoceros-type creature. It was a simple lap race against three other opponents. The controls in this race were quite simple--we steered with the analog stick on the nunchaku attachment and used the remote as a whip to coax short bursts of speed form our mount. The final minigame we played was another racing-type game, but instead of running laps around a track, we took to the skies for some skydiving. In this game, Rayman fell toward the earth and we had to use the remote to guide him through floating rings on his way down. There wasn't much to this game, but the simplicity was a welcome break from the shaking and shooting of the other games.

Rayman Raving Rabbids looks like it will put the Wii controller to use in a variety of ways. Some of the ways the game uses the controller are obvious, such as in the shooting games. However, with more than 70 minigames in all, there are plenty of opportunities for the game to test the capabilities of the hardware. Rayman Raving Rabbids is scheduled to be a launch title for the Nintendo Wii, so be sure to check GameSpot frequently for new updates about all the minigames in this manic collection. 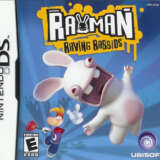