Sega's classic arcade game has been commanded to "rise from its grave" and appear in a new game on the PlayStation 2.

TOKYO--The game now known as Project Altered Beast originally surfaced back at E3 in 2003. It was only shown on video, and then it basically vanished. It has popped up once or twice since, but at the 2004 Tokyo Game Show, Sega is showing off Project Altered Beast in playable form. Yes, those of you who had money on the game and believed it didn't actually exist, just lost. So pay up.

Project Altered Beast is a third-person action game that pits you, as some sort of genetic freak-man who can turn into a variety of creatures, against a ton of enemies. In your standard human form, you'll have a few combo attacks, but your strength is limited. But by acquiring the proper DNA codes and chips, you'll be able to transform into one of over 10 different "altered" forms at will. The default transformation is a werewolf, but we also caught a glimpse of a yeti-like form that was much larger, slower, and tougher. As a werewolf, you'll be able to execute some swiping combos and a jumping roll.

The environments in Altered Beast don't look like much. They're small and the textures aren't terribly noteworthy. Where the game picks up a bit, though, is with its heavy coat of blood. When you start mowing through rows and rows of enemies, blood really starts to splatter all over the place. It's a pretty cool-looking effect.

The gameplay in Project Altered Beast seemed a little simplistic, but with gene-manipulation menus and other options, the game could fill out pretty nicely. For more updates, be sure to check GameSpot's coverage of the Tokyo Game Show 2004. 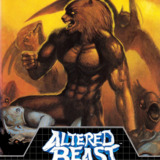