Bandai Namco's Power Rangers-inspired tactical RPG Chroma Squad is out now on PS4 and Xbox One.

The game, which was developed by Brazilian indie developer Behold Studios and funded through Kickstarter, was previously released on PC in 2015. A PlayStation Vita version was also in the works, though that was ultimately canceled.

Inspired by classic Japanese Tokusatsu shows, Chroma Squad puts players in control of a team of former stunt actors who open up their own television studio. You'll have to assign roles to your actors, outfit them with equipment, and "direct" them through turn-based tactical battles that make up the show's "episodes." The game also features skill trees and a branching storyline with three possible endings.

Chroma Squad is available digitally through the PlayStation and Xbox Stores and retails for US $15/£12/AU $20. 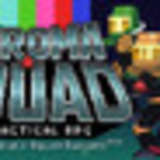