<i>Weekly Famitsu</i> asks readers to identify the game they associated most closely with summer.

In the latest Weekly Famitsu, the magazine published the results of a poll asking readers which game popped into mind when they heard the word "summer." Leading the list of selected games was Sony's Boku no Natsuyasumi, a role-playing game that simulates traditional Japanese summer vacation activities, complete with beetle-wrestling competitions. In second place was the Jikkyou Powerful Pro Baseball series from Konami. This isn't surprising given that televised high-school baseball playoffs become something of a national obsession during the summer season in Japan. Third was Tecmo's horror adventure title Zero, which one reader said, "makes you feel chilly, even in the heat of summer." Square Enix's Final Fantasy series was voted into fourth, with Konami's Boktai series rounding out the list at number five, due to its incorporation of actual sunshine in the game play. 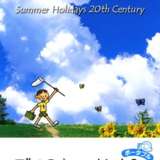