The Xbox boss says that the Xbox 360 gameshow was "ahead of its time".

1 vs. 100 on the Xbox 360 is remembered fondly by many of the 114,000 players who jumped into it over the year it ran. The digital game show, which pitted one player against a 100 player "mob," would reward successful players with Microsoft Points to spend on games. In an interview with GameSpot, Xbox head Phil Spencer discussed the title, and says that he's as keen as anyone to see it return.

Reflecting on the success of HQ Trivia and similar programs, Spencer says that he and ID@Xbox's Chris Charla have "had many, many discussions" on what a return would look like. "I know I teased it a little bit a couple of weeks ago," he says, hinting at his comments during a Fanfest stream.

"I wouldn't tease people if I didn't think that that was something, whether [or not] it's that exact IP," Spencer says. "But the mechanic of people playing online I thought was, and just the whole structure of that, was really neat and special--maybe ahead of its time. Getting to work on that was fun."

Spencer says that he "regrets" that they didn't keep it going beyond the one year it ran. 1 vs. 100 wasn't available in numerous regions either, with only US and UK/Ireland variants. But while he "can't announce anything," the Xbox boss suggests that something is in the works. "I'll just say a big fan of what's going on there and Chris and I, we're on the case. I'll put it that way."

During the interview, Phil Spencer also revealed that he has played Elden Ring, and has some impressions.

The Xbox Series X and S are available now. Check out GameSpot's coverage of Microsoft's new machines below: 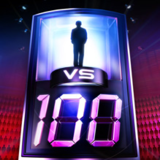