The expansion/overhaul for the popular fantasy MMO is now available.

Phantasy Star Online 2: New Genesis, the expansion/overhaul for the MMO, is now available for free on Xbox One, Xbox Series X|S, and PC. The new version will coexist with the base version, and while characters can be shared across both versions, each game will have its own individual progress.

New Genesis gives Phantasy Star Online 2 a graphical overhaul, in addition to introducing new environments and story content. Because New Genesis exists side-by-side with the base game, it exists as an update to the original game and not a standalone title. The Xbox version of the game now sits at about 80 GB, containing both versions of the MMO.

Phantasy Star Online 2 originally released in Japan in 2012, only making its way to the West in 2020 with an Xbox One and PC release. While the MMO is very popular, its age was visible, so the graphical overhaul came as welcome news. However, Sega didn't didn't want to undo everything players had done in the original version, which is why the two versions coexist.

The two versions are accessible from a single launcher, which means that anyone who wants to boot up the original version of PSO2 will need to progress through the first portion of the New Genesis story. It was said on the PSO2 forums that players will need to do the opening of the game and make it to the hub world before being able to access the original game. 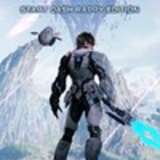