The PSP RPG is coming to PC this summer.

The eighth installment in Nihon Falcom's long-running Ys series, Lacrimosa of Dana, is scheduled to arrive this September, but PC players will have a chance to play its predecessor before then. Publisher Xseed announced it is bring Ys Seven to PC this summer.

The upcoming port will be available to purchase through Steam, GOG, and the Humble Store. This particular version features touched-up visuals and runs at 60 frames per second. It also boasts controller support and Achievements on Steam and GOG Galaxy. You can take a look at a new trailer for the game below.

Ys Seven was originally released for PSP back in 2010. The title follows series protagonist Adol and his companion Dogi as they journey to "reunite the estranged five tribes who serve and protect the Five Great Dragons," according to a press release. Like other installments in the action-RPG series, the game features a real-time battle system that allows players to switch between their three party members freely during combat.

Ys Seven was generally well-received when it originally debuted. GameSpot awarded the PSP release 7.5/10 in our review, saying, "The satisfying elements of the gameplay still carry the Ys formula well in the present day, for new fans and old." The series newest installment, Ys VIII: Lacrimosa of Dana, is releasing for PlayStation 4, PC, and Vita on September 12. 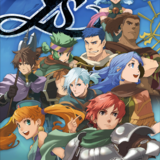