The Abe's Odyssey remake will launch on Nintendo's hybrid system later this year.

Oddworld Inhabitants released a trailer alongside the announcement, although because of the visual effects used it perhaps doesn't give the best look at how the game will actually look and run on the system. You can watch it below.

The game has previously been released on PC, Wii U, PS3, PS4, PS Vita, Xbox One, iOS, and Android. The first release was back in 2014, and the original Abe's Odysee came out in 1997. New 'n Tasty is the third Oddworld title on the system, following the earlier releases of Stranger's Wrath and Munch's Odysee.

Another Oddworld remake is also in the works right now. Oddworld: Soulstorm, a remake of Abe's Exoddus, is coming to PS5, along with PS4, Xbox One, and PC via Epic.

The game received an 8/10 in GameSpot's 2014 review. Critic Dan Hindes called it " a remake that feels as though it was crafted with love and respect." 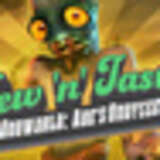