When the PSP hits retail stores in just under three weeks, EA Sports Big's Street line of sports games will be well represented. Not only will NFL Street 2 Unleashed find its way to the Sony handheld, but the developer's urban basketball series will also have a portable home in the form of NBA Street Showdown. We checked out a recent build of EA's inaugural basketball effort for the PSP and like what we've seen so far.

Since our last look at Street Showdown, the game has really been shaping up into an impressive package. First and foremost it looks wonderful, with big, detailed player models zipping all over the court in three-on-three fury. In fact, for all the up-court and down-court action and all the dunking, blocking, and alley-oops, we didn't notice any hiccups in the frame rate, which is impressive considering the nice amount of detail found in each player model. The differences in player frames are perhaps not as drastic as those found in NBA Street V3 for the consoles, but the big men still look big, and even the little guys will be able to get some air under their sneakers when they need to.

If you've played an NBA Street game before, you'll be right at home with the trick system found in Street Showdown. Just as in the console versions of the game, you'll string together tricks to earn points that will eventually garner you a gamebreaker, essentially a superstylish basket that will not only earn you a basket, but take away points from your opposition. You don't necessarily need to use your gamebreaker right away, however, as the game gives you the opportunity to "pocket" your level-one gamebreaker. Fill up the meter again, and your new and improved gamebreaker will do even more damage to your opponent's score.

Because of the simplified PSP control layout, most significantly the two fewer shoulder buttons, your array of available tricks is reduced in Street Showdown. You'll still be able to pull off a variety of flashy moves designed to rack up style points and make your opponents look silly, but the level of depth doesn't begin to approach that of NBA Street V3. Still, tricks are easy to pull off, using the square button and the left and right trigger buttons, and the stunts themselves will elicit a smile the first time you see them.

New features in Street Showdown include two arcade modes: arcade shootout and shot blocker. These are essentially minigames that will obviously test your shot-making and shot-denying abilities. Of the two, the shot-blocking game plays more like the Street series itself. You'll take your character on the court against a bevy of NBA shooters and attempt to brick-wall every shot that comes your way. Things vary when the shooters you're competing against start passing among each other and faking shots, hoping you'll bite and jump too early. Allow too many swishes and your game is over. The arcade shootout minigame looks like it's straight out of an old-time arcade. You have three baskets to choose from, and you aim your shot with the PSP's analog stick. It takes some getting used to, especially when you factor in shot strength, but it could be good for a few laughs.

NBA Street Showdown looks like a fun addition to the Street series, and it is certainly shaping up to be one of the more refined-looking games available near the PSP launch. We'll have a full review of the game when it's released in April. 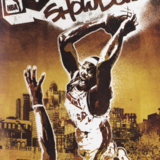