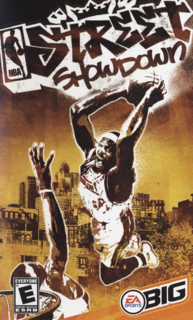 7.7
Good Check out the review

EA sports up the PSP

Feast your eyes on some breathtaking footage of NBA Street Showdown in this trailer.

EA lets us hit the court with its upcoming PSP hoops game.

The NBA Street makes its debut on the PSP with customization, different game modes, and new gameplay features. Now you can build both your reputation and show-stopping Gamebreakers on the streets by performing all-new flashy dunks, dribble tricks, and combos.