We take a look at Koei's new action-oriented battleship design and combat game. Details inside.

Naval Ops: Warship Gunner is a new tactical naval combat game from the folks at Koei, the makers of such strategy and action games as Dynasty Warriors and Romance of the Three Kingdoms. Warship Gunner follows Koei's style in that its story and setting are historically based, though loosely, and its gameplay mixes action with a good deal of strategic depth and customization options. The game is still going through the localization process--the build we received still contains some Japanese text, and none of the dialogue has been recorded in English--but from what we've seen so far, Naval Ops: Warship Gunner will present a deep and involving experience for strategy action fans.

What we could glean of the story in Naval Ops: Warship Gunner from the mostly Japanese cinematics is interesting, if a bit strange. You're the commander of a battleship that's been sucked through an interdimensional portal while patrolling the high seas. Upon arriving on an alternate version of Earth, you find yourself caught up in a conflict between a global empire and a resistance movement, and you quickly align yourself with the freedom fighters and begin to carry out missions that will help subvert the world's oppressors.

Warship Gunner's gameplay is made up of two distinct parts. Though you'll begin the game by playing through a brief combat mission, each action stage after that is preceded by a design phase in which you're given the ability to customize your current battleship or create an entirely new one. As you play through the combat portion of the game, you'll amass funds that you can apply toward a number of ship upgrades in the design section. The options for upgrading are quite extensive--you can obtain new sonar and radar, replace your hull, acquire planes for extra aerial defense, upgrade your engines, and make a host of other improvements to your main vessel. Of course, there are plenty of new weapons, both defensive and offensive, that you can purchase as well. Though you start off with modern weaponry, your arsenal can eventually grow to include futuristic armaments like laser cannons. History buffs can also choose to play through the whole game using only World War II-era weapons. If these options aren't enough, you can go a step further and actually assemble an entire ship from scratch. In this construction mode, you can outfit your ship by selecting systems and weapons and then placing them in the desired locations on your ship schematic.

The combat in Naval Ops: Warship Gunner takes place in real time and requires pretty quick reflexes. You normally view the action from a third-person perspective, and the controls are pretty simple: You can set your speed by tapping up and down on the control pad, and you can turn left and right by pressing left and right or using the L1 and R1 buttons. Your weapons targeting system is independent of ship movement, so you have a free-floating targeting reticle that you can move around to aim shots with. For further precision, especially if you want to target specific systems on an enemy ship, you can hit the triangle button to switch to a zoomed-in first-person mode. When you're aiming like this, your movement is restricted, so you have to be judicious in using the zoom view. You can also hold R2 to switch to a zoomed-in overhead view. This puts you into a defensive mode, where your weapons automatically deal with torpedoes, planes, or other incoming threats.

Naval Ops: Warship Gunner seems like it will be a solid action-strategy hybrid that will satisfy players who really like to explore customization options in addition to blasting away at enemy targets. The game looks pretty good, too, with fairly detailed ships, decent water effects, and fairly nice lighting. Look for more coverage of the game as its late-June release date approaches. 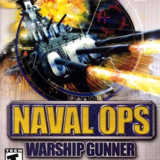