Nathan Drake Won't Be In The Next Uncharted Game

No cameo for Drake.

Those hoping for an appearance by Nathan Drake in Uncharted: The Lost Legacy are being let down well ahead of the game's release.

In a post on the PlayStation Blog, writer Josh Scherr revealed that the idea of an apperance was contemplated before ultimate being discarded. "We entertained a few possible ideas around including Nate as a secondary character," he said. "But everything we did felt superfluous because we tied it all up with Uncharted 4."

Naughty Dog made it clear in advance of Uncharted 4's release that the game would be the "final chapter" in Drake's story.

Director Kurt Margenau expanded on Scherr's comment about The Lost Legacy, stating, "We're not going to touch on Nathan Drake in this at all."

The two went on to joke that Drake might instead be busy with something we briefly see him doing in Uncharted 4: playing video games.

"You can sort of imagine Drake sitting on the couch playing Crash Bandicoot while Chloe and Nadine are off galavanting," Scherr said. Margenau agreed, adding, "Yeah, the Crash Bandicoot remaster."

The Lost Legacy is a standalone single-player expansion of sorts to Uncharted 4. Set after that game, it stars two existing characters, Chloe and Nadine, and features what Naughty Dog says is the largest level ever in an Uncharted. It's due out sometime later this year. 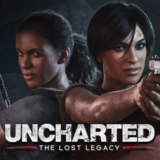