In June, EA took the lid off of Wii All-Play, an initiative designed to customize the publisher's annualized sports titles to the tastes of the nontraditional gamer sect populating Nintendo's best-selling console. At that time, the publisher rattled off a number of its flagship sim sports franchises that would see custom installments, including Madden NFL, NCAA Football, Tiger Woods PGA Tour, NBA Live, and FIFA Soccer.

One franchise not included in that list was the publisher's NASCAR racing series, which has been absent from Nintendo's platforms since 2004's standout racer NASCAR 2005: Chase for the Cup. As it would turn out, EA in fact does have plans to pit NASCAR on Nintendo's console, and the final result won't be far off from the All-Play aesthetic.

The publisher today announced NASCAR Kart Racing, dubbed the "the first and only NASCAR title available for the Wii." The stylized racer features caricatures of 14 NASCAR Sprint Cup Series drivers, as well as 10 additional animated racers, each with its own custom attributes. The game accommodates up to four players in locale, head-to-head races.

True to EA's flagship NASCAR racer, the game Wii game will include a number of official tracks, including Daytona International Speedway, Talladega Superspeedway, Dover International Speedway, and Bristol Motor Speedway. The kart racer also promises to transport gamers to a variety of exotic locales, ranging from deserts to freeways to junkyards.

NASCAR Kart Racing is currently slated to arrive for the Wii on February 10, five days before the 51st running of the Daytona 500. The full lineup of official NASCAR Drivers is listed below. 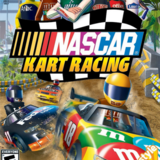