20th Century Fox may be bringing Capcom's Blue Bomber to the big screen.

A Hollywood adaptation of Capcom's Mega Man series is in development with 20th Century Fox and Chernin Entertainment attached to the project, according to a report from The Tracking Board.

The website states development has started, with David Ready (Red, Jack Ryan) and Michael Finfer (Tooth Fairy) overseeing the project on behalf of Chernin Entertainment, a production company that specialises in developing properties for movies and TV.

20th Century Fox, meanwhile, is reportedly being represented by Mike Ireland and Ryan Horrigan (Noah, 12 Years a Slave). There is no mention of the extent of Capcom's involvement, if any.

Capcom has not yet officially addressed the rumours of the Mega Man movie. GameSpot has contacted the company for a statement. Additionally, the project has not been revealed in an official capacity by 20th Century Fox or Chernin Entertainment.

Mega Man--known as Rock Man in Japan--debuted in 1987's Mega Man, an action-platformer for the Nintendo Entertainment System. Since then he has gone on to star in numerous new entries in the main series, as well as spin-offs.

The core series focuses on Mega Man--an android boy created by Dr. Light--defending the world from the evil Dr. Wily and his Robot Master creations. Players journey through distinctly themed levels and battle the end boss to acquire a new ability, eventually moving on to a new stage where this skill can be of benefit.

Capcom has enjoyed success with movie adaptations of its Resident Evil series, the latest of which started shooting in August 2015. Titled Resident Evil - The Final Chapter, could be the final entry in the long-running movie series

Although the many Resident Evil movies released throughout the years have not been critically acclaimed, they perform well commercially. Resident Evil: Retribution and Resident Evil: Afterlife, for examaple, grossed $240 million and $300 million worldwide, respectively. 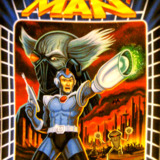