We take a look at EA's latest addition to the Medal of Honor franchise.

At a press event held by Electronic Arts, the development team from EALA was on hand to give us a demo of its upcoming addition to the Medal of Honor franchise, Medal of Honor Pacific Assault. Pacific Assault is a PC-exclusive title that, much like last year's Medal of Honor Rising Sun, takes place in the Pacific Theater, pitting you against Japanese forces during World War II. However, Pacific Assault is in no way a sequel to Rising Sun, rather, it is a completely original title that just happens to be based in the same era and region. In the game, you play as a young Marine recruit named Tommy, who rises from the dredges of boot camp to take part in some of the biggest battles in the Pacific Theater's history. Our demo gave us a look at the battle of Tarawa, where over 4,000 Japanese soldiers occupied the island and tried to hold their ground against 5,000 US soldiers.

The demo began with Tommy and his squad being ushered ashore via transport boats. Many historians label this battle as the D-Day of the Pacific Theater, and from watching this sequence, it was easy to see why. Pure chaos unfolded around us as our transport chugged to shore, and frequent death precluded many of the transports’ ability to get to shore (as did a large reef, which, WWII buffs will recall, prevented all transports from actually making it to shore at all). As we moved toward the shore, we came upon a scuttled ship, which was occupied by a number of Japanese soldiers. Historically, this ship actually did exist, and it happened to belong to a former resident of the island. The Japanese army scuttled the ship themselves, pulling it away from shore to use it as a defense post. Once the Japanese saw us, we had to man a Gatling gun to take out all the soldiers and eventually blow up the ship. As this was going on, random cross fire flew all over the place, both from other transport ships and enemy fighter planes that were circling the area. All told, it was a most intense situation.

Once the boat was dispensed with, we pulled up alongside a pier that extended out from shore. Again, the area was riddled with enemy soliders, and we had to clear it out, lest they take out our transports. As we blasted our way through the enemy, we got to see some examples of the game's unique artificial intelligence. Your squad mates in particular are designed to behave very much like an actual squad would, so they will provide you covering fire and respond to squad commands. Keeping your squad healthy is a must, as the difference between having one more gun on your side is really a difference between life or death. In order to keep them healthy, you'll have to call for your squad's medic, or drag your squad mate or mates to where your medic is. This is dangerous, however, as the enemy will specifically target your medic if he is brought out into the open, so it's up to you to provide covering fire for him.

The enemy AI is designed to specifically react as a Japanese soldier from that era would. Their morale is largely based around their commanding officer, and if he is killed, their morale will drop significantly. However, the Japanese weren’t especially fond of the idea of being captured, so, rather than simply dropping their guns and surrendering, the enemies will thrust out their bayonets and run at you full steam.

The pier area also gave us a good look at the game's physics, which are based entirely off of the Havok physics engine. As gunfire goes off around you, you’ll see objects affected by the bullets. Boxes will move around, things will explode and burst all over the place, and so on and so forth. One neat thing we saw came when we were pinned down by a group of soldiers. There was a pair of flammable gas canisters nearby, and by shooting a canister, we caused it to suddenly fly off in the direction of the enemy, exploding and taking them out. Along with the use of the Havok engine comes the requisite use of rag-doll physics on fallen characters, and from what we saw, the game makes good use of this effect, letting bodies droop and contort quite nicely.

Though we didn't actually get to see any of it during our demo, we had the chance to talk to the developers about Pacific Assault’s multiplayer component. The game will feature eight maps, spread across three distinct multiplayer modes, including free-for-all, team deathmatch, and a new mode called intruder. The intruder mode is fully objective based, allowing you and your teammates to play as either the Marines or the Japanese, completing specific objectives in order to win. Each objective in this mode is progressive, meaning you won't have multiple objectives to select from at any given time. This mode is also class based, letting you play a specific role on your team, such as a medic or a sniper.

Visually, Pacific Assault is looking quite sharp in its current state. Up-close shots of you and your squad give a particularly nice impression, as quite a bit of detail has gone into the character models--especially when it comes to faces. The action was extremely intense all around, reminiscent of many of Call of Duty's more frenzied battle sequences, with plenty of explosions and scripted sequences going off all around you. All told, it looked great.

Medal of Honor Pacific Assault is set to ship this fall. We'll bring you more on the game in the coming weeks. 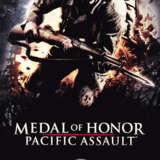