Evidence is mounting for a possible Mass Effect Trilogy remaster, this time via a pre-order for a Normandy SR2 replica.

In the wake of yet another leak suggesting the existence of the Mass Effect Remastered Trilogy, a pre-order for a Dark Horse-produced replica of the Normandy SR2 from Mass Effect 2 has appeared on Amazon, potentially hinting at an imminent remaster.

Currently on sale for $45.49, The Dark Horse Deluxe Mass Effect Alliance: Normandy SR2 is a small-scale figurine of Commander Shepard's shop from probably the most acclaimed Mass Effect entry. The figurine is just like the in-game ones you can collect and display in your personal quarters, with a metallic N7 symbol to really stand out when on show. Check it out below. 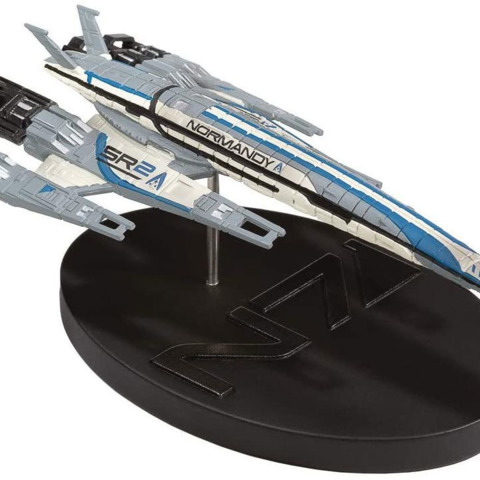 The listing specifically mentions that this is a "Remastered Edition" of this model, which could line up with a potential trilogy remaster soon. The replica is set to launch on November 25, but a previous retailer leak suggested that the trilogy is coming to current-gen consoles and PC this October. EA, Mass Effect's publisher, has yet to formally announce anything.

Mass Effect: Andromeda was the last entry in the series, with BioWare Montreal attempting to spin-off the franchise in a brand-new galaxy with a whole new cast of characters. While a good game, it failed to capture the splendor of the trilogy before it. "As a Mass Effect game, Andromeda falls well short of the nuanced politics, morality, and storytelling of its predecessors," critic Scott Butterworth wrote in GameSpot's Mass Effect: Andromeda review.