The newest update for the Marvel game has arrived, and it's a big one.

The newest patch for Marvel's Guardians of the Galaxy is out now, and it's a big one. The November 17 update adds ray-tracing on PlayStation 5 and Xbox Series X|S, introduces an uncapped frame rate option on Xbox Series S, and improves performance on the base model PS4.

The new update also adds a Save Rollback feature, which allows players to revert to an earlier save in a mission--this could come in handy for those who experience a blocking issue and can't progress. The new patch also fixes a series of bugs and other issues. This is v1.05 on PS4 and PS5, v1.6 on Xbox One, and v2.6 on Xbox Series X|S. A patch is coming to PC this week, as soon as Friday, November 19, and separate patch notes will be posted on Steam.

In addition to improving baseline performance on PS4, the November 17 Guardians of the Galaxy patch changes the Visor sensitivity so PS4 controllers with "more wear and tear" can still use it. For the uncapped frame rate on Xbox Series S, this lets players experience frame rates between 30 and 60 FPS. The developer warned that this could cause unstable frame rates and a less-than-ideal scenario.

As for the bug fixes, the new patch addresses an issue where custom difficulty settings could get reset and instances where poison gas was blocked from getting frozen. There is also a fix for a funny-sounding bug that made a Rocket voice line play through Groot's voice. You can see the full patch notes below, as posted on Reddit. 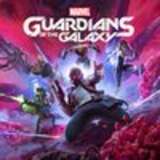 Marvel's Guardians of the Galaxy
Follow
$59.99 on Walmart
Buy