When Atari announced that it was partnering with fashion mogul Marc Ecko for a game, many scratched their heads. The game, titled Marc Ecko's Getting Up: Contents Under Pressure, had gamers climbing through a fictional metropolis plastering landmarks with graffiti art.

The paint may be peeling from Getting Up, but that doesn't mean that Ecko is putting the controller down forever in favor of needle and thread. On the one-year anniversary of Getting Up's release, Ecko today announced the formation of Mark Ecko Entertainment, a gaming division of the cultural icon's growing empire.

"Our goal is to expand creativity in videogames--we want to try brand new things," said Ecko, who will serve as chief creative officer of the new company. "There are so many great ideas out there that either aren't getting the attention they need or are being completely ignored. We will work with the visionaries of the medium and get these inventive titles in the hands of gamers."

Mike Lynch, formerly of Marc Ecko Enterprises, will serve as president of the game company. Marc Fernandez, formerly of Take-Two Interactive, will be vice president of creative, and Shawn Rosen will fill the duty of executive producer.

No projects have been announced, but Marc Ecko Entertainment will be meeting with developers at GDC 2007, which takes place next month in San Francisco. 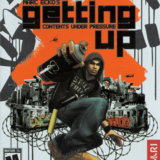 View Comments (72)
Marc Ecko's Getting Up: Contents Under Pressure