We jumped headfirst into the carnage of MAG's closed beta and fought it out in the Acquisition mode.

Zipper Interactive's latest project is certainly ambitious. Following on from the SOCOM series, the developer's new PlayStation 3-exclusive shooter, MAG, will support up to 256 players per map. The team has designed a new game engine and network infrastructure to facilitate this, and from our time with the beta, it's certainly shaping up to be an online shooter like no other.

Set 20 years in the future, you play as a soldier in a "shadow war" among three private military contractors: the gung-ho Valor, the high-tech Raven, and the guerrilla-like SVER (Seryi Volk Executive Response). We chose to go into battle as a Valor soldier and customised our character and kit before jumping into a match. Each team has five characters and three voice signatures to choose from, as well as a number of different fatigue colours. You're also given 3,400 credits, MAG's in-game currency, to spend on weapons and equipment, and you can save preset loadouts into five slots to ensure you're prepared for any situation.

Your loadout is split into five slots--primary weapon, backup weapon, gear, heavy gear, and armour/apparel--and each slot can hold one item. There were several weapons to choose from, including the M4A1 and Mk 14 Mod 0 EBR assault rifles, as well as the MK46 Mod 0 machine gun, although the M9 was the only sidearm that was available. You can also equip additional items, such as fragmentation and smoke grenades, first aid kits, and vehicle repair kits in the gear slot. The heavy gear slot can add some serious firepower to your arsenal, such as the MK 153 Mod 0 rocket-propelled grenade, and this comes in really handy when trying to take down a vehicle. Finally, you can equip light, medium or heavy armour, depending on whether you prefer mobility or protection.

It looks like there'll be plenty of variety in MAG's match types, although most were unavailable in the beta. These include domination, where you have to fight over eight control points; sabotage, where you need to capture or defend three pieces of valuable intel; and training, for when you need to get in some practice. We played a lot of the Acquisition mode, which supported up to 128 players on a map called Elk Bay Logistics. The objective was for each team to either steal or defend several prototype transport vehicles located inside sea containers at a Valor base. To steal a vehicle, you need to hack a nearby security pad and then drive the vehicle back to your base.

As part of the Valor team, we played a defending role in every match while Raven players attacked our base. Although the primary objective was to defend our transports, our team also needed to protect an antiair battery from attack and ensure that any stolen transports were destroyed before they reached Raven's base.

Each team is split into four eight-man squads, designated alpha, bravo, charlie, and delta. We were auto-assigned to one but could switch to another when there was a spare slot, and we needed to join a queue before we could get into a match. Thankfully, the wait was relatively quick, and we're happy to report that we didn't run into any lag issues once we jumped into the game. Once you've earned enough experience on the battlefield, you will be able to apply for leadership positions before each map, although these weren't available to fresh recruits like us. Each team has several spawn points, and one of these was the ubercool bunker. In addition to healing any troops that enter it, the bunker comes equipped with a remote-controlled chain gun on its roof, and you can commandeer this to mow down nearby enemy troops.

MAG's gameplay is fast and frantic, and with so many players on the map, you constantly run into trouble. Despite housing 128 players, the map didn't feel overcrowded, although when players swarmed to certain areas, there tended to be a few bottlenecks. With so many enemies to contest with, it becomes rather difficult to complete objectives single-handedly, and it seems that coordinated teamwork will play a vital part in winning each round.

MAG doesn't deviate from standard shooter conventions, so the controls are laid out as expected; however, we did notice one odd control mechanism: Pressing the L2 button scrolls through your gear (for example, frag grenade, first aid kit, and RPG) and the R2 button switches between your primary and secondary weapons. To change from an assault rifle to the RPG and back, for instance, might require five button clicks, and when you're getting shot at, this feels like an eternity. When you're critically injured, you will "bleedout," which gives your teammates a chance to revive you if they're quick enough. Unfortunately, none of our teammates gave us a chance at redemption, and this may've been due to the fact that we were usually gunned down in the most hotly contested areas of the map. There's lots of information onscreen, including squad details, a 3D map of the battlefield, markers and distance pointing to objectives, and the number of transports that have been captured.

At the end of each round, you can see how much experience you've accumulated, such as 5XP for a kill, 50XP for achieving the primary objective as a team, or, if you're unfortunate enough, -5XP for friendly kills. There are also plenty of stats to check out, including win/loss records, highest ranked squads and players, and leaderboards for your squad and all players on the map.

MAG is currently due out next January in North America, with Europe yet to get a firm release date. For more on this promising online shooter, check out our video preview which features the Sabotage match type, and be sure to check back for more information as the release date approaches. 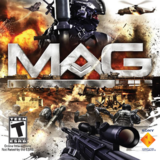