Last month, LucasArts drew attention when it put up a job posting for a gameplay engineer to work on an as-yet-unannounced open-world role-playing game. That's not the only secret project in the works at the publisher, as LucasArts' job pages now include listings for developers to work on an action adventure game, a first-person shooter, and an aerial combat game.

LucasArts has a history in all three genres. In the '90s, the company's X-Wing series of Star Wars flight combat games were among the most popular such titles on the PC. While the publisher also has its Secret Weapons series of World War II-era dogfighting sims (Secret Weapons of the Luftwaffe and Secret Weapons Over Normandy), the requirements listed for the aerial combat game position indicate that experience in the genre, "especially space-based shooters," is a plus.

At the moment, LucasArts has only a pair of upcoming projects announced. Those games consist of Kinect Star Wars for the Xbox 360 and the PC online game Star Wars: The Old Republic, which is primarily being developed by Electronic Arts' BioWare Austin studio. 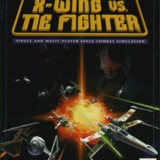 There are 165 comments about this story
Load Comments (165)