We check out the Looney Tunes game based on the upcoming movie.

Looney Tunes: Back in Action is the upcoming GameCube and PlayStation 2 game based on the upcoming movie of the same name. The third-person action game is being developed by UK developer Warthog and will star Bugs Bunny and Daffy Duck. The game's story will follow the plot of the upcoming motion picture, in which Bugs and Daffy are in a race against the evil Acme Corporation to find the blue monkey diamond.

The game will feature appearances by 22 Looney Tunes characters and take place in five major locations. The gameplay will feature a mix of standard platformer action, mission-based objectives, and puzzles. You'll be able to switch control between Daffy and Bugs over the course of the game as needed. Both characters will have unique abilities that make them better suited to tackle specific levels in the game. For example, Bugs is able to burrow into the ground, jump higher, and use costumes, so in one level, you'll be able to buy a hula girl costume to distract some security guards while you move on to a new area. Daffy is able to use costumes like Bugs, and he can also swim in the water, fly, and survive what EA refers to as "perils"--life-threatening hazards. While perils will usually eliminate Bugs immediately, Daffy is a bit more resilient and will merely be horribly disfigured for a brief time.

The game itself seems quite easy to pick up, and it should be appealing to younger players. In the jungle level we played, we were required to free the Looney Tunes characters who had been captured by natives and placed above cauldrons before an onscreen timer ran out. The enemies in the level consisted of natives wearing enormous tribal masks.

The graphics in the game are simple and clean, and they feature a good amount of cartoonlike detail. Bugs and Daffy look good and are animated well. Most of the enemies seem a bit generic, but fortunately you'll also meet up with famous villains like Wile E. Coyote, the Tasmanian Devil, and Yosemite Sam. Of the two versions on display, the GameCube version seemed to have a more stable frame rate and richer colors, though both versions looked good enough.

The audio in the game seems quite good, since the game features voice work provided by the same actors who appeared in the film. Back in Action will contain roughly 10,000 lines of dialogue for the assembled Looney Tunes, which should lend the game quite a bit of personality.

So far, Looney Tunes: Back in Action is shaping up to be a solid but simple platformer that should be fine for kids and Looney Tunes fans. The game is currently scheduled to ship this fall. 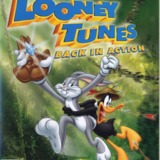 Looney Tunes: Back in Action
Follow
$21.95 on Walmart
Buy