We sat down with publisher Anaconda at the Leipzig Games Convention for a demo of the combat-focused role-playing game, Legend: Hand of God.

Anaconda isn't the most well-known publisher, in or out of Europe, but it brought an interesting lineup of games to the 2006 Games Convention in Leipzig. Among those games is an action role-playing game in the vein of Diablo called Legend: Hand of God. We got a first look at the game behind closed doors, and although it was an early build of the game, it looked like it could be a game to watch for fans of hacking and slashing.

The game follows a basic revenge plot, which means that you're given moral carte blanche to kill anything and everything in your path as you avenge your fallen comrades. You play as a warrior who is a member of a group of fighters known as the Order of the Flame. As a young recruit, you have to go through an initiation, which takes you to the top of a distant peak. While you're away, some evil force slaughters all of the members of the Order of the Flame, leaving your character feeling more than a bit miffed when he gets back to town and discovers what's happened. The story sounds very straightforward, but you can expect Legend to have a heavy emphasis on story and character development.

The gameplay in Legend: Hand of God is focused on your single hero character. You can develop your character as a warrior, a magic user, or a hybrid of the two, but no matter how you choose to play, the game boils down to destroying one monster after the other and collecting gold and items. Like Diablo, Legend is a point-and-click game in which you move by clicking your way around the map, and attack by clicking on enemies.

Based on the demo we saw, Legend is keeping the gameplay extremely simple, with a focus on the satisfaction of hacking enemies to bits in dramatic fashion. This is achieved through the unique animations that add a special flair to the way your hero fights. The animations change to fit the situation--so, for example, if you're fighting a massive troll, your hero will have to jump in the air to land a hit rather than simply slicing away at the troll's feet. The effect is entirely superficial, though, so you don't have to worry about diminished power or accuracy when performing these leaping attacks. You also don't have any control over the type of attack you perform; it's all context-sensitive and at times seemingly random. In addition to the normal attacks, you can also perform finishing moves. Again, these finishers are random, but in this case we saw the hero fighting a large troll. After whittling away the troll's hit points for a while, the camera zoomed in as the hero leapt onto the troll's back and stabbed it in the neck to finish it off. Although these moves are entirely superficial, they do tend to make the combat a little more engaging and satisfying than it otherwise would be.

Aside from the combat, one unique characteristic of Legend is the cursor. Instead of the usual arrow, the cursor in Legend is a living entity that can help you out. The cursor is a luminescent fairy that provides light in dungeons, and can also help you out by providing hints. It doesn't seem like the kind of gameplay mechanic that could drastically change the game, but it's an interesting idea nevertheless.

The graphics in Legend: Hand of God look good, and although we never saw any intense mob combat, the portion of the game that we did see ran smoothly. The only environments shown in the demo were a typical outdoor path through a lightly treed plains area and craggy rock formations, as well as a dark underground cave. The character models look good and move well, and many of the animations are quite satisfying to watch. While in the cave, we watched as the hero knocked down a zombie and chopped its head off, so if nothing else, at least you can rest assured that Legend meets its quota for zombie decapitation.

Legend: Hand of God is scheduled to be released in Spring of 2007 in Europe, with no word yet of a US release. In the meantime, keep an eye out for new screenshots and details about this game and all the others at the 2006 Leipzig Games Convention. 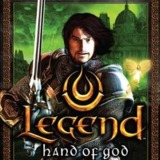