Senior game designer Richard Lemarchand talks about the creation of Raziel in our latest designer diary.

When project director Amy Hennig and the team at Crystal Dynamics set out to create Soul Reaver in 1997, one of the first seeds of inspiration came from a little-known character in a weird silent movie from 1920 called The Cabinet of Doctor Caligari.

The film is one of the most famous examples of German Expressionism--a filmmaking movement that wanted to break away from the sober and theatrical conventions of the day to make surreal, dreamlike entertainment. This is not unlike the goals of the Soul Reaver team! The haunted, sunken look of the central character Cesare--a cadaverous, sleepwalking mystery man--provided some early visual inspiration for Raziel.

Additionally, it's no coincidence that there's a similarity between the warped and slanted sets in Caligari and the dizzily twisted aspects of Soul Reaver's Spectral Plane. Vampire fans will be interested to know that Caligari was a big influence on the infamous bloodsucker movie Nosferatu and continues to inspire Hollywood filmmakers to this day.

Over the course of many dozens of concept sketches, Raziel's form began to take shape. His blue color was inspired by Hindu tradition. His broken wings were meant to emphasize his tragic character and his nature as a "fallen angel." His name comes from rabbinical lore, with Raziel meaning "Secret of God." This is quite appropriate, since Raziel's destiny is hijacked by an ancient deity looking for an agent to do his dirty work.

Having gotten an idea of what the character was and what he looked like, we needed some history for him. Amy and some of the other team members had recently completed work on Blood Omen: Legacy of Kain. That game concluded with Kain, the antihero, being faced with the choice either to sacrifice himself and save the world of Nosgoth or damn Nosgoth and become its king. The latter seemed like a cooler premise for a new game, and so, assuming that Kain had chosen the throne of a ruined world, the idea of a group of vampiric henchmen came up.


"Raziel was once first among Kain's vampire lieutenants but was condemned to the Abyss for an apparent transgression against his master. He evolved beyond Kain, developing a pair of leathery wings. Kain tore the wings from Raziel's back, and ordered his fellow lieutenants to throw his broken body into the vortex at the center of the Lake of the Dead.

The descent into the watery maelstrom should have destroyed him, but instead Raziel was transformed. Resurrected by a mysterious ancient god in the depths of the Abyss, Raziel emerged to wreak his vengeance upon Kain and his former brethren--no longer as a vampire but now as a reaper of souls."

Now that we had the seed of a story, we needed some motivation for Raziel. This would start to give us a framework for the level progression and would occasionally inspire game mechanics. It would also move Raziel forward through the plot. Amy again:

"In the beginning, Raziel was driven only by rage and a lust for vengeance. As his quest deepened, he realized that Kain had not destroyed him out of jealousy but as part of some greater plan. Kain's goals are still a mystery, and Raziel resents playing his pawn.

Ultimately, Raziel realizes that he has been used time and again, manipulated by all the players around him, like Kain, his creator; the Elder God, who resurrected him; Moebius, the devious Time Streamer; and even the ancient vampire Janos Audron, his hoped-for mentor.

While his hatred for Kain still remains, Raziel is now driven by only one motivation--to throw off the shackles of Fate and the machinations of his enemies; to exert his own free will; and to determine his own destiny."

Heady stuff! And it's only part of the equation. Even while we're making a story-based game, we've always tried to stay very focused on gameplay here at Crystal Dynamics. Our ultimate goal has always been to make gripping, fast-paced games with responsive, action-oriented play mechanics, and a story that is knitted into the gameplay in a convincing way. Legacy of Kain: Defiance is no exception. In fact, we think we might've pulled it off better than ever before.

Fans of the series will be pleased to know that most of Raziel's abilities have been carried over from the previous games, while the ones that weren't working well have been removed or fixed. And there are more than a few new surprises in store.

Legacy of Kain: Defiance is a game that you can pick up and play immediately. Like all good action adventures, we're lucky that we can leverage the elegant simplicity of a well-established control scheme and can then start building interesting new things on top. Raziel can still creep, run, jump, glide, and "phase" through certain barriers.

He still bears a legendary sword--the Soul Reaver--in its "wraith blade" form and can imbue it with different elements in order to solve problems and defeat different types of enemies. We worked hard to balance the puzzle-solving and combat elements of the different Reavers, trying to make each one feel distinct. I don't want to give the game away just yet, though, so I'm afraid you'll have to wait and see what each element can do. Zombie barbeque, anyone?

Most of this type of design work--deciding on the abilities that the player characters have--has to be done in preproduction so that when you begin to create the levels for the game, you know what abilities you're designing for. It takes a tremendous amount of self-discipline to keep focused on what's fun about the abstract elements of a particular mechanic, but if you have a working game engine--and we were very lucky in that regard--you can discover a lot by trying things out and then feeding your discoveries back into the "paper" design process.

Raziel can still visit the Spectral Realm--a parallel world of the dead that mirrors the "real" world but has different physical properties and which is populated with souls and the unspeakable creatures that consume them. For Defiance we've given Spectral a graphical revamp and, more importantly, a gameplay makeover.

We've found that we have to design the role of the Spectral Realm very early on in the level layout process for it to work properly. We've always faced a big challenge with Spectral. In order to foreshadow the puzzles you want the player to solve, you really have to make the role of Spectral, in puzzle-solving, somewhat predictable. It has to be done without being mindlessly obvious, which is a bigger challenge than it sounds. We learned that if we used the Spectral Plane often enough, it remained in the forefront of player's minds. We then had much better success with each new Spectral puzzle we presented.

Of course, there's also a big production challenge in implementing the Spectral Realm, as it essentially doubles the amount of level content you have to create for Raziel. Our exceptional programmers invented some cool new ways of automating the Spectral creation process, and it helps that we're a big gang of workaholics.

That about wraps up our overview of Raziel's character. Stayed tuned for more Defiance "downlow" in the next designer diary. Next time we'll be talking about Kain and the advancements we've made in our combat system. 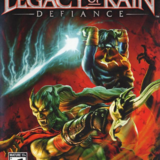