Dinosaurs and lawn mowers, together at last.

Have you ever had the very specific interest to mow some grass alongside a T-Rex? Well, now you can. Skyhook Games has launched the Dino Safari DLC for Lawn Mowing Simulator, and the Jurassic Park-inspired expansion lets players cut the grass in all manner of new locations surrounded by dinosaurs.

The four main zones in the DLC include the T-Red Paddock, the Cretaceous Canyon, the Herbivore Valley, and the Raptor Enclosure. In all the locations, players are called upon the cut the grass to make maintain the grounds of the Dino Safari park, which happened to open in 1994 (a year after Jurassic Park the movie was released).

"Dino Safari first opened its doors in 1994 to capitalize on the mainstream obsession with all things prehistoric, and is proudly still going strong today," reads a line from the DLC's description. "This beloved local location is one of the area’s premier tourist attractions, transporting kids and adults alike into a bygone time around its proud central volcano. There are four main zones containing eight dinosaurs whose grounds need maintaining… if you're brave enough!"

The Dino Safari DLC is included with Xbox Game Pass or it can be purchased by itself for $5.

Lawn Mowing Simulator launched in 2021 and, for a period of time, had more viewers on Twitch than Call of Duty: Warzone.

"Lawn Mowing Simulator has been a labor of neatly-trimmed-love from day one," the developer explained in a blog post. "Every single thing we've crafted--from the gloriously green maps to the specifications of the equipment people like Atlas use in everyday life--has been done with care. We take pride in every detail, no matter how small or seemingly insignificant to some, and want our players to experience the authentic--and sometimes literal--highs and lows of lawn mowing." 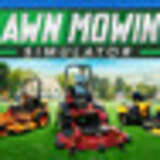