Volume 3 goes to the PlayStation 2 with a new duet mode; original game to hit the Xbox with downloadable content support.

The Xbox version of Karaoke Revolution will contain more than 45 songs. All of the songs from the original PS2 version will appear, as well as 10 classic hits from the Motown label. Unlike the rest of the songs in the series, which are "sung in the style of" the original artists, the new Motown additions will actually be performed by the original artists. The game will also have support for downloadable content, allowing players to add even more songs to their libraries.

The main new addition to Karaoke Revolution Volume 3 for the PlayStation 2 is dual microphone support, which allows for duets and competitive simultaneous singing. Three different modes will let players either cooperate or try to outsing each other. Duet mode is the cooperative mode, and here players will harmonize and sing different parts of the same song. Sing-off mode has players switching off from phrase to phrase, though both players sing the chorus. Knock-out mode is a unison mode, where both players sing the same thing at the same time, and the better singer wins.

The song list for Volume 3 contains a wide array of music, including several songs that are intended to work well for the duet mode. Though the unlockable songs have yet to be revealed, here is a partial list of offerings:

Both of these new Karaoke Revolution games are currently planned for November releases. 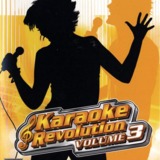