Suda 51 and Hideo Kojima have been talking about collaborating for five years. The first concrete project to feature the pair of star designers has finally come to light, as Famitsu reports that Kojima today announced Sdatcher.

Pronounced "Su Datcher," the project is a radio drama inspired by Kojima's 1988 adventure game Snatcher (eventually released in the US on Sega CD in 1994). The tweak on the name is a nod to No More Heroes director Suda, who will write the story. Kojima will direct the show, with Silent Hill composer Akira Yamaoka providing the music and Yoshio Kasatoshi working on character designs and illustrations (though it's unclear what illustrations a radio drama would require).

While Suda and Kojima have not previously teamed up on a game, Suda and Yamaoka are coming off their own critically acclaimed collaboration with Resident Evil creator Shinji Mikami, Shadows of the Damned.

It's not clear when Sdatcher will premiere, or who will be used as the show's voice cast. Kojima did say it should be enjoyable to newcomers as well as those familiar with the original Snatcher. The project has been in the works for some time, originally being talked about in 2007 under the code name "Project S." 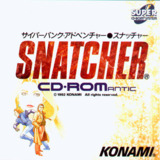