Shadows of the Damned Review

Shadows of the Damned balances strong gameplay with artistic delights to create a mesmerizing experience.

Honestly, even if you forget about the demons constantly trying to kill you, hell is a pretty lousy place. Take, for instance, an ordinary act like turning on the lights. While residing on the earthly plane, you just flick a switch and your world is bathed in a fluorescent glow. But if you're stuck in hell, you have to find a goat head (listen for the bleats!) and shoot it with your flaming pistol. You do have a flaming pistol, right? There's a chance it's called a Boner. That's what Garcia Hotspur calls his gun. Make no mistake about it, Shadows of the Damned is a weird game, but it doesn't use its strangeness as a crutch to hold up sagging gameplay. There's a chance you may become immune to the reggae charm of the sushi lamp or just find vulgar jokes off-putting. But the beauty of the brilliantly crafted combat situations makes it so that you can't help but push on to see what devious traps lay before you. Shadows of the Damned turns the gloomy world of hell into a digital paradise.

If you had to choose a prime candidate for hell's most-wanted list, a demon slayer would be a fine guess. Garcia Hotspur kills corrupt souls for giggles, so it's not surprising when his lovely girlfriend Paula is kidnapped by the vindictive lord of darkness. Unfortunately for the bad guys, there isn't anyone better equipped to win her back. Plot details don't get much deeper than a basic setup, but story is still a large part of this stygian adventure. Garcia pals around with a floating skull named Johnson that serves as your tour guide and moral compass, and which transforms into a gun or torch when the situation warrants. The demonic-hunting duo is unrelentingly crass, fixated on the male reproductive organ and its many useful functions. It's immature, to be sure, but it also comes across as genuine. There's a natural rapport between these characters that gives their raunchy dialogue a whiff of believability. There are times when Shadows is tiresome and there are times when it's laugh-out-loud funny, but it's usually amusing enough to add to the experience.

On the most rudimentary level, Shadows of the Damned is a third-person shooter. Victorian houses, farming villages, and other gloomy abodes confine you in mostly linear levels, and you dispatch pain to unruly demons with your trusty guns. Garcia moves with the troubling grace of an injured ballerina. Jerky animations and a zoomed-in camera combine to make navigation clunky, and there are times when enemies trap you in a corner, which obstructs your view. But, for the most part, the controls function admirably. When Sister Grim lashes out with her razor-sharp scythe, you can dive away like a frightened rabbit. Or when demons get too close, you can run, perform a quick turn, and fire to end their pathetic lives in one sure blast. Movement inconsistencies are a looming presence, but Garcia can still overcome this liability with practice.

Flawed core mechanics have been known to derail lesser games, but there's no such problem in Shadows of the Damned. Garcia enters hell prepared to execute every demon in sight, and he has the firepower to pull off such a feat. Endearing names like Skullblaster, Hotboner, and Dentist are affixed to guns comparable to a shotgun, pistol, and machine gun, but they are a lot more versatile than their real-life counterparts. Upgrades let you increase carrying capacity, damage, and reload speed, but these tools of destruction let you go much further. At specific story moments, new powers are unlocked that make the already-delicious combat even more enticing. Your ordinary pistol gains the ability to shoot combustible mines that are just as handy for knocking down cracked walls as they are at blowing a wicked demon sky high. With a blast from your shotgun, you can blow off an arm or leg or initiate an instant-death decapitation, but why waste your time aiming? Homing bullets let you dispose of demons with lazy ease. Weapons are diverse and deadly in Damned, and it's sadistically satisfying to strike down your teeming enemies with them.

Combat is a lot more involved than just shooting any fool who wanders your way. Darkness is the creeping threat that lingers around you, and if you get caught in the gloomy veil, your health slowly depletes. To lift this fog, you must seek out a goat head positioned somewhere on a wall. It's a basic concept that is used in fascinating ways during the course of your heroic rescue mission. You may need to run through a hall of shadows, cognizant of your slowly draining health, to reach safety on the other side. Or a monster may confront you that fears the darkness above all else, and you have to figure out a way to quench flames without succumbing to death yourself. Puzzles force you to step in a darkened room to find the solution, and certain bosses require you to make the same sacrifice. How can you so readily kill if you're afraid to dance with death when the time arises? There's a constant balance to tempt fate without dying that makes these scenarios intoxicating.

Each new sequence builds on the previous in unexpected ways, and this growth provides the strongest reason to keep pushing forward. You never know what to expect in Shadows of the Damned. The darkness is brought up in numerous ways that continually makes you stare at the screen in wonder, and there are other tricks beyond playing with the light. A midgame turret sequence revels in the juvenile humor Garcia lives for, and though it's fairly typical, the foreboding atmosphere combined with the stench of imminent death makes it a memorable diversion. In another stretch, you transform an ordinary chandelier into a handy ride that can dispose of demons in a hurry. There are puzzles to figure out, collectibles to find, and hidden storybooks just waiting to fill you in on the creepy details of demonkind. By the time you get to the fourth act, you may assume that you've learned every trick, but that's far from the case. There are a few stages that completely break free from its third-person shooter trappings, and the fun doesn't slow down for a second. There's always something new and surreal around the corner, which keeps you constantly playing to see what could possibly pop up next.

Shadows of the Damned explores different types of gameplay to keep things fresh, but the best diversions are the boss fights. Every one of these terrible beasts is incredible in some way. In the first battle, you find yourself in a market confronted by a crazed man with a harmonica and a machete. Garcia is a big man, but he looks like a skinny runt compared to this undead freak. Your normal shots are ineffective, so you're left turning away from this growing threat and running as fast as you can. The market is a maze of overturned tables, evacuated stalls, and barren aisles as far as you can see. The breath of the mad man is in your ear, so you run, hurdle tables, and run some more as you look for safety of any kind. You round a corner, strain your ears, and only hear the dulcet tones of silence. Have you lost him? Are you free? You stand still for a moment, straining every sense to figure out where he has gone. And then, with a crash, he bursts through the wall beside you and the chase is on again. The madman can die, as you find out through experimentation, but your heart will race before you slay him. Every fight forces you to use your brains along with your fingers, and these fights make up some of the most amazing moments in the entire game.

All of the incredible moments in Shadows of the Damned are intensified by the excellent sound design. The score is an absolute masterpiece. Every track does a fantastic job of setting the mood, and the sheer wealth of different styles is staggering. One persistent character serenades you with an operatic aria that even Garcia remarks upon its catchiness. During other moments, you may be treated to a guitar-heavy rock song or a quiet piano medley. The music is good enough to listen to on its own, but in the context of the game, it heightens your senses even further. What's just as impressive is how well the sound effects are implemented. You're in hell and you feel like you're trapped there. Sound walls you in during fights, crawling up your spine and smacking you in the face. You can't escape. A demon growls in the distance. Is it nearby? Is it hunting you? The rattle of your machine gun echoes off the walls while a goat cries overhead. You can hear the darkness closing in on you. It has swallowed you whole--a soft siren counting the beats until your death. It gets in your head and pounds on your eardrums as it screams and berates you. Where is that crying baby? Shut it up! Cram a strawberry in its mouth! The story is partly told through the music and effects, and it's amazing how much this adds to the adventure.

Shadows of the Damned takes 10 or so hours your first time through, and not one second of that time is wasted on boring activities. This is a tightly crafted adventure with a relentless sense of pace that continually pushes you forward. Every boss fight and diversion serves to enhance the experience, and the combat sequences are so beautifully realized that they continually surprise and entertain. When the ending credits roll, you'll just want to plow through the game all over again, but that's where one of the few problems surface. There's no New Game+ option, so you don't have the chance to take your upgraded guns with you from the beginning. It's a big disappointment because there's really no incentive to play through again, other than getting to take this crazy trip one more time. But you won't have to worry about that your first time through Shadows of the Damned's amazing journey into the bowels of hell. 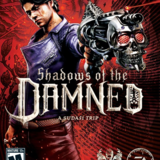 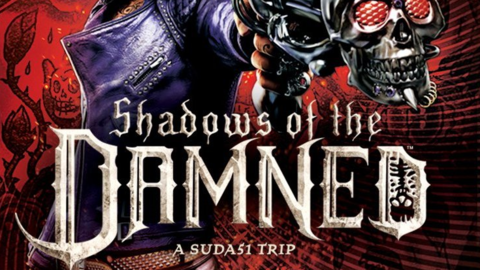 Shadows of the Damned

Shadows of the Damned is a new psychological action thriller from Suda 51 and Shinji Mikami's Grasshopper Manufacture.