HAL Laboratory, the developer behind the Kirby and Boxboy series, has launched its first mobile game, Part Time UFO. Originally released in Japan last November under the moniker Hataraku UFO, the game is now available in international markets for iOS and Android devices and costs $4 to download.

Like many of HAL's other titles, Part Time UFO puts players in control of an adorable hero, in this case an anthropomorphic flying saucer with an extendable claw. Having just arrived on Earth, the UFO decides to take on various odd jobs to assist the denizens of the planet, using its claw to catch fish, assemble a pyramid of cheerleaders, load up trucks with cargo, and more. You can take a look at some gameplay in the trailer below.

Completing jobs will reward players with money, which can be used to buy new costumes for your flying saucer. Part Time UFO features 27 levels and more than 20 costumes to acquire, with additional jobs to unlock by completing hidden achievements in each level. Players can also post the craziest pileups they've created on social media using an in-game sharing function.

HAL's first Nintendo Switch game, Kirby Star Allies, is slated to release around the world on March 16. Like other mainline installments in the series, the game is a side-scrolling platformer in which players use Kirby's copy ability to inhale enemies and take on their powers. This time around, players can also throw hearts at enemies to turn them into allies. You can watch us play through several early levels of Kirby Star Allies and face off against a weirdly buff King Dedede. 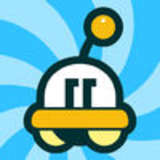