SNK Playmore confirms that NeoGeo fighter previously slated for release this month is down for the count.

SNK Playmore touted upcoming products like The Metal Slug Collection in its Game Developers Conference meeting with GameSpot today, but one title that wasn't in the mix was King of Fighters '94 Re-Bout, previously scheduled for an Xbox release later this month. Reps for the publisher confirmed that the game had been canceled, but did not give a reason for the move.

Re-Bout was originally announced in 2004 as a PlayStation 2 remake of the original King of Fighters game, the '94 edition. In April of 2005, SNK Playmore confirmed it was working on an Xbox port of the game, and the PS2 version was all but confirmed dead the next month at E3 2005, where the publisher's '94 Re-Bout sell sheets made no mention of the game being made for Sony's system. 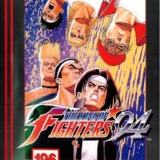