Yesterday, the NPD Group delivered its anticipated December and year-end US retail sales report, and while it reflected its fair share of industry downs, there were also a few wins. Most notably, Microsoft continues to enjoy success with the Xbox 360's new camera-based motion-sensing add-on Kinect, which helped to lift accessory sales 10 percent to $853.2 million. According to Microsoft, two of Kinect's key software titles also performed well in December.

In a post to his Twitter feed today, chief of staff for Microsoft's Interactive Entertainment Business Aaron Greenberg announced that the publisher's internally developed Kinect Sports as well as Harmonix's Dance Central both sold more than 1 million units last month.

Neither title surfaced in NPD's top-10 chart following their shared November 4 debut, in part due to their status as Kinect launch titles. However, with Kinect now occupying some 3 million homes in the US, according to Wedbush Morgan analyst Michael Pachter, the software titles had a better shot in December. According to NPD, the titles would have been among the top 10 best-selling SKUs in December, but did not make the multiplatform overall sales chart, which the stat-tracking organization reports.

For more information on the two titles, check out GameSpot's reviews of Kinect Sports and Dance Central. 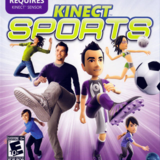